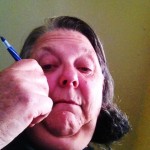 Writers are weird. I didn’t know just how weird until I became one.

From being an opera singer for several decades, I already had a head start on being weird. That was a big help when I decided to take up yet another art form that will never make me rich. Being bat shit crazy came naturally to me. I knew how Franz Kafka must have felt, living an outwardly bourgeois life while having Metamorphosis knocking around in his brain. You have to get that stuff out before it ignites and shoots your head like a rocket into the ozone layer.

For example, look at how I talk now. I have tons of words flying around in my head, just waiting to be released. I always want to use just the right words, too, which means that, even with huge numbers of English words and occasional ones in Italian, German or French hitting my brain’s language center, half the time I can’t find the one I want, the one that will perfectly express whatever I’m trying to say.

No, I don’t have Alzheimer’s. I just have too many words up there crowding other words out.

I’m also finding it harder and harder to say something in a simple way. A couple of days ago, I described to someone how I hurt the big toe on my left foot.

WHAT A NORMAL PERSON WOULD HAVE SAID: I stubbed my toe on a bookcase.

WHAT I SAID: My toe had a fight with a piece of furniture and the furniture won.

Talking like that will either get you a laugh or a straightjacket.

I don’t think there is any cure for this peculiar malady, other than sitting at a computer and writing as much as possible.

6 thoughts on “Help! I’m Being Chased by Words!”