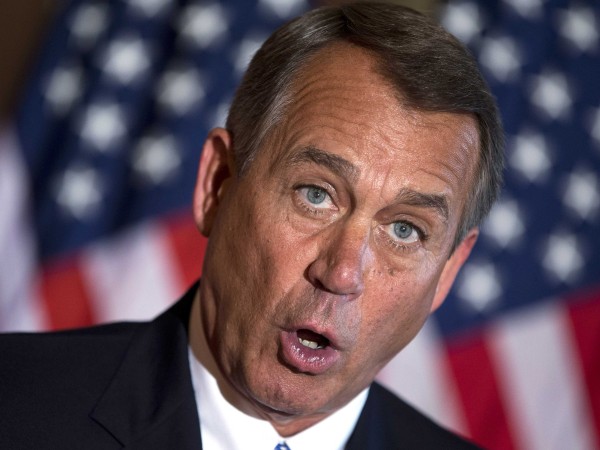 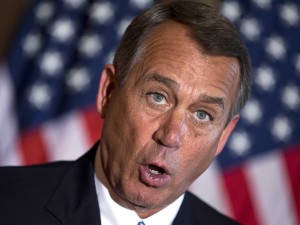 House Speaker, John Boehner remains guarded about Pope Francis’ upcoming visit.  “We’re walking on eggshells here,” says Boehner, “If we let the Pope  address Congress with Jumbotrons on the Mall, next thing you know, we’re going to have to give equal time to the Evangelicals, the Seventh Day Adventists, and, lord help us, the Grand Imam.”

“Are you concerned this will blur the separation of Church and State?” asked This Reporter.

“Hell, no,” said Boehner, “I’m worried about the separation of lobbyists’ funds from the Republican Party’s war chest. This could wipe us out and put a double-wide pantsuit in the White House come 2016.”

“You hear what the Pope said in Ecuador?” snapped Boehner, “He apologized for the Church’s treatment of the indigenous peoples in the Americas for Christ sake.  We can’t have him come up here and start apologizing for slavery, union busting, unfair banking practices and stagnant minimum wage.  The very core of Republican values. That’s why I’m vetting his speech.”

“But the Pope doesn’t speak English so how…?”

Boehner punched me gamely in the shoulder.

“Exactly, amigo!” he smirked, “No one will understand a goddamn word except a few Guidos in the North End of Boston. Just to be safe, I’ve hired an intern who spent her junior year in Rome to massage the Pope’s speech, take out the kinks and put a positive spin on yours truly.”

“What about the Pope’s stand on global climate change, US aggression in the Middle East and economic inequality?” asked This Reporter.

“What about it?” said Boehner. “Congress won’t hear a word because those boneheads have been asleep since 2008.  Why should they wake up now? As for the faithful minions out on the Mall, they’ll only hear what I want them to hear.”

“Isn’t that a violation of the First Amendment?” asked This Reporter.

Boehner poked his forefinger into his mouth and made a gagging sound.

“The Constitution doesn’t apply to visiting foreign dignitaries, especially to Vatican chorus boys in satin gowns,” he said.  “More importantly, it’s my job as Speaker of the House to protect Congress from threats to national security.”

“How is the Pope a threat to security?”

“Have you heard a word I’ve said?  The Holy Father is a fucking loose canon,” said Boehner. “That’s a pun, isn’t it?  Holy Father…canon.  I’ve got to write that down and use it when I have dinner with Trump.”

“How does Trump fit into this?”

“Where did you study journalism?  Guadalajara?” said Boehner. “All of Washington knows Trump’s going to be our next President and I’m going to be Secretary of State, as long as we can keep the genie in the jar.”

“You mean the Pope?” said This Reporter.

“Now you’re using your noggin,” cried Boehner, giving me a noogie. “I’m Catholic. Trump’s a recovering Catholic.  We both go to the same tanning salon.  We’ll sweep into the White House with the Pope’s blessing just like the Kennedys did, but without all that bleeding liberal crappola.”

“It doesn’t both you that Trump has no political experience whatsoever?” said This Reporter. Boehner was ready to give me another noogie, but This Reporter ducked just in time.

“You see what Trump did in Arizona?” gushed Boehner. “The Donald understands politics better than that Muslim knucklehead in the White House. He knows how to grab the media by the balls and squeeze till their eyes pop.”

“Aren’t you concerned that Trump’s remarks are turning away the Latino vote?” asked This Reporter.

“We don’t need the Chimichanga vote. That’s not how elections are decided anymore or have you forgotten how we got W into the White House?” said Boehner, his face turning a darker shade of orange. “We just need Wall Street and that Vegas bagel boy Adelson to keep the dineros flowing our way.”

“So you’re not concerned that Trump is divisive?” asked This Reporter.

“No way, Jose,” said Boehner. “Trump is bringing the nation together, getting everyone to agree on one thing.”

“That we don’t need an intellectual in the White House with a law degree throwing around fancy words. We need a plain speaking salesman like The Donald. America is open for business.”

This Reporter thanked the Speaker of the House for his time and threw up his lunch behind the bushes outside the Capital.