HAZARD, Kentucky. Ray Bob Suggins, a career revenue officer for the Internal Revenue Service in this small town at the confluence of the Tennessee and Ohio Rivers, thought he had seen it all in his thirty years collecting taxes for Uncle Sam.

“I’ve seized a family’s satellite dish, I’ve put a lien on a guy’s blue tick hound–everything,” he says with a laugh. But his face clouds up with the latest directive from what he refers to sarcastically as “headquarters”–the national office of the IRS in Washington, D.C.

“Hey–don’t take that! ‘Dukes of Hazzard’ is on tonight!”

“Those guys sitting in their offices back east don’t know the people of Kentucky,” he says with emphasis. “Where they come up with some of their ideas I’ll never know.”

The idea that has Suggins’ dander up is Rev. Proc. 06-137, which will require IRS regional offices to implement “Project Eunuch,” an attempt to replicate in the U.S. the success Indian officials have had using eunuchs–castrated males who dress as women–to collect taxes.

“You can’t argue with the numbers,” says former IRS Commissioner Doug Shulman. “Hijras“–as eunuchs are referred to in India–”have produced remarkable results through the use of embarrassment, a tactic we have overlooked in the past.” And indeed in Patna, an Indian city with a population of nearly a half million where only about 2,000 citizens pay their property taxes on time, local officials report that eunuchs collected 425,000 rupees ($9,240) in their first day on the job.

Shulman: “They do this cool dance, sort of like this.”

In India hijras accost taxpayers on the street–taunting, cursing or touching their hair and cheeks–or set up outside a residence where they chant and dance loudly until a deadbeat relents and pays up. The eunuchs, who for the most part live in poverty because of their status as sexual outsiders, are paid a commission on what they collect. “We did a cost-benefit analysis,” says Shulman, “and eunuchs produce better results than boring techniques like putting a lien on somebody’s house and waiting for them to sell. Plus a lot of them are very attractive with all that makeup they wear.”

So Suggins agreed to be a “guinea pig,” subjecting himself to castration at the Veterans Administration Hospital in Louisville in exchange for two years’ extra credit towards his pension. “I should be able to retire at age 60,” he says as he squirms in his chair due to the discomfort that persists following the operation. “I figger it’s worth it if I live that long.”

As painful as it was to lose what he refers to as “the family jewels,” what comes next is even harder in his view. “I got to dress up like an Indian woman and go door-to-door and jingle my bells” to make delinquent taxpayers pay up. “That ain’t gonna be easy.”

After Suggins applies cheap rouge, powder and lipstick, he heads over to the Coffee Pot Café where he know Lyle Oehrke will be sitting with his buddies at their regular table, sipping coffee before he heads out to work–or not–as a used car salesman at O’Connor Chevrolet-Buick on South Highway 65. “Lyle spends most of his paycheck every Friday at the Golden Palomino,” a “gentlemen’s club” just outside the city limits where he is generous with tips for the “pole dancers” and strippers who work there.

Suggins appears at the entrance to the Coffee Pot, spies Oehrke over in the corner, and goes into his carefully-rehearsed “song and dance,” a tribute to the Indian god Krishna in the form of Mohini, a beautiful woman who is a central figure in the culture of the hijras. “Hey, hey, hey,” he chants as he claps rhythmically, swinging his sari back and forth. “I’m really gonna make your day.”

Oehrke is at first surprised, then dismissive. “Well look who’s here,” he says with a knowing grin. “If it ain’t Sweetie Pie Suggins, lookin’ for a date.” He laughs and his friends join him, although their nervous tension is apparent.

“I’m from the IRS, and I’m gonna lift up my dress, dress, dress–unless”-Suggins stops for dramatic effect-“you clean up your overdue taxes, penalties and interest mess!”

“I wish I could wear me somethin’ like that!”

Nae Ann Wingersheek, long-time waitress at “The Pot” as locals here refer to the restaurant, comes to the table for a last round of refills and to present the check. “You all gonna sit here all day or go out and earn a livin’?” she says with a good-natured jab at the group’s indifferent work habits. “Hey, Ray,” she says to Suggins when she notices the tax collector, his arms above his head as he rings his finger cymbals.

“Hi Nae Ann,” Ray replies as he scoots back a step to allow her to get by.

“I like that outfit,” she says, referring to the saffron sari that he flirtatiously lifts from time to time, threatening to expose himself but pulling back in the hope that the full range of tax collection remedies permitted by the new IRS procedure won’t be necessary.

“You don’t think it makes me look fat?” Ray asks.

She studies him for a moment. “From the front, no. From the back, it looks like two hogs fightin’ under a sheet!”

The table bursts out in laughter, which Suggins joins in with good spirits. “I walked right into that one,” he says with a grin.

The table of regulars starts to pony up and, when Suggins sees Oehrke pull his wallet from his back pocket, he pounces. 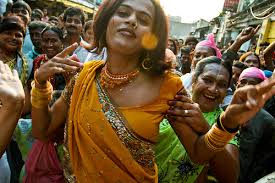 “Lord Krishna, all-powerful, crush this deadbeat like a grasshopper beneath your heel–he is about to pay for his meal!”

“Why should I worry about your work, when you treat your fellow taxpayers like a jerk?”

Everyone in the restaurant is watching now; Oehrke’s friends have ponied up, and tax collector and deadbeat stare each other down, mano a former-mano.

“All right, goddamn it,” Oehrke says with disgust. “Here,” he says as he pulls a roll of bills out of his back pocket and counts off two hundred dollars in twenties.

“The IRS Commissioner thanks you very much,” Suggins chants as he picks up his haul, “but I’ll tell him for the record you were not a soft touch.”

Available in Kindle format on amazon.com as part of the collection “Death, Taxes and More Taxes.”

2 thoughts on “IRS Turns to Eunuchs for Tough Tax Cases”