It’s Monday night and I’m standing outside the Opera House in Boston, checking my watch. The wife’s out of town so I’ve got two ducats to the Boston Ballet’s Lady of the Camellias, and I’m holding one for Rahm Emanuel, the first balletomane ever to be elected Mayor of Chicago. If Richard J. Daley were alive he’d have a heart attack, but he’s dead so he gets the night off.

As I wait for the former Clinton and Obama aide to show up, I ponder the self-conscious tough-guy carapace he puts on. The dead fish he sent to a pollster, the insults he hurls at other men, the confrontations he gets into in the locker rooms of health clubs. Is he acting out some deep-seated insecurity over his youthful career as a dancer who was offered a scholarship by the Joffrey Ballet, or is he just a jerk? I guess we’ll never know.

But the question must be asked, because Duh Mayor failed to win a majority in the general election in February, and now faces a run-off vote against a guy named–get this–Jesus.  It’s like Acme Wrecking Co. vs. Little Sisters of the Poor.  Chicago voters have grown tired of Rahm’s B-movie gangster act, and he’s reached out to me to help him soften his image.  A cab pulls up and Emanuel gets out, his face darkened by his usual expression of about-to-burst-irritation.

“Frickingoddamn MORON!” he shouts after the cabbie.

I move to intervene, as the pimps and prostitutes who patrol lower Washington Street are quick to complain about any unruly behavior that might disturb the ambiance for the suburban “johns” who are their best customers.

“Everything okay?” I ask.

“That guy says Ted Williams is the greatest hitter who ever lived,” he fumes.

“A lot of people in Boston think that,” I say by way of commiseration. “They’re just plain wrong.”

“You can say that again, it’s Ernie Banks.” 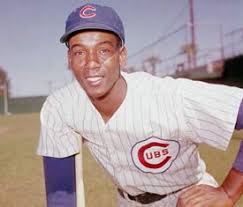 I give him a look of pitiless contempt. “Ernie Banks–Mr. ‘Let’s Lose Two’?”

Emanuel’s eyes pick up the glare of the street lights, and his lids float slowly downwards. He looks like a wolf about to seize its prey by the neck, which would probably be a happier outcome than dealing with an angered Mayor of Chicago.

“Surely you jest,” I say. “What about Rogers Hornsby–highest single-season batting average of the modern era?” 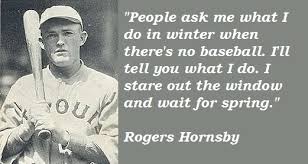 “He was a god-damned Cardinal!”

I knew that would get his goat. “You know why God made the Chicago Cubs?” I ask him.

“So the Cardinals can put fifteen wins in the bank every year before they break spring training camp.”

Emanuel lunges at me, but I execute a pas des saucisses sans doubte, a move I’ve mastered as a result of all the ballets my wife has dragg–seen with me over the years. He slips on the cobblestones–brought to America from England in one of the stupidest cases of coals-to-Newcastle ever, since New England produces fresh, native rocks like weeds–and falls to the ground. “You’ve got to watch it in Boston,” I say as I help him up. “It’s not a clean, modern, corrupt and insolvent city like Chicago. It’s a dirty, old, less-corrupt and less-insolvent city.”

“Where’s the frickin’ ballet,” he says as he dusts himself off.

“Right across the street,” I say. “Here are the tickets.”

He starts to grab one but I pull it back. “New Englanders are known for their sense of thrift,” I say. “I’ll sell you one–not give you one.” 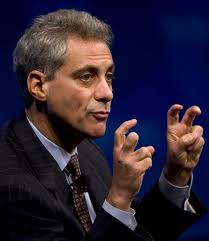 “This is sign language for ‘I’m going to scratch your eyes out.’”

His face clouds over again. “How much?”

“Yer outta yer frickin’ mind!” he screams at me.

“Um–I think you can afford it,” I say. “You made $16 million in two years as an investment banker.”

“And I earned every penny of it!”

“I’m sure you did. But I’m wondering–no prior experience, never went through a training program, don’t have an MBA and didn’t major in business as an undergrad. You must be a natural!”

“Don’t worry,” I say. “I’m sure if you didn’t add any value to the firm in your two years there, you’ll make it up to them later.”

His face softens a bit, and he even cracks the faintest glimmer of a smile. “That’s the ticket. I’m from Chicago–I take care of my friends.”

“And your friends take care of you!” I add with a smile. “Like the $320,000 a year you made as a director of Freddie Mac for going to six meetings a year. Good jobs at good wages, as our former governor Mike Dukakis used to say.”

“Those were long, boring meetings,” he says, a trifle defensively.

“Still–that would be outlandish director’s compensation in the private sector. You were in the public sector.” 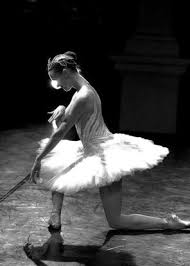 “And then he screamed at me just like everybody else–he’s so down-to-earth!”

“Freddie Mac was a private entity!”

“Until it wasn’t,” I remind him. “Barney Frank told us it was private, but he turned out to be wrong on this as on so many other points!”

I can see he’s had enough of this by-play, so I tell him he can have the ticket for face value. I make it sound like I’m being charitable, but actually I’m afraid he’ll turn me in for breaking the anti-scalping laws of my Puritanical state if I charge him more.

I give him two bucks change from his Benjamin, and we turn towards the theatre, a little vestpocket venue by comparison to the grand stage on which the Joffrey Ballet of Chicago performs.

“You know, I used to date a dancer from the Joffrey,” I say, trying to find some common ground of connection. “She was that rarest of things–a ballerina with a D-cup figure.”

“There is no such animal,” he says, repeating a well-worn line we both know from the Midwest about the farmer from downstate Illinois who saw a giraffe at the Brookfield Zoo.

“Yeah–really. Unlike down-to-earth men of the people with $16 million bucks in their pockets.”

Available in Kindle format on amazon.com as part of the collections “Dance Fever!” and “Chicago: Not Just for Toddlin’ Anymore.”

Cartoon: Yo, Semite Sam, c’mon out. Bet you didn’t know he was Jewish?

Cartoon: Who says I can’t draw a crowd?