Skip to content
Recent Humor
Cartoon: Yup, I think he heard the Supreme Court decision
Ask a Terrier: Tough Times! And Tougher for Some.
The menu…
Wisdom for Dummies
Ripping the Headlines Today, 7/9/20

BOSTON.  For many years Marty “Slats” Carbone ruled as King of Church Green, an intersection where three streets converge near South Station in Boston.  “I had a good life,” he says.  “I was the ruler of all I surveyed, from that curb over there to this one over here.”

Carbone maintained a busy–and profitable–begging franchise from the time he first “dropped out” of the U.S. economy in the 1970’s until 2010, when the market collapsed.  “Damn point-of-sale crap,” he says with disgust before spitting in the street, referring to the now-ubiquitous terminals at retail counters that allow people to pay for small purchases such as coffee using their phones.  “Before then, businessmen emptied their pockets of spare change, even if it wasn’t really spare, just so they wouldn’t break the line of their suits,” he says as he spies a well-dressed stockbroker about to cross against the light.

But Carbone hasn’t survived for four decades as a panhandler without a highly-developed ability to sense when the winds of high finance are changing against him.  “I realized my business model was too heavily dependent on cash receipts,” he says as he whips a chrome and plastic gizmo out of his pocket and intercepts the stockbroker.  “With proper revenue management I accelerate my payment stream, cut average time-in-float and reduce my interest expense.” 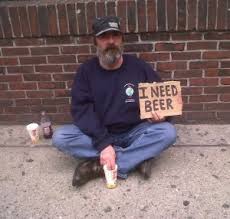 “Do I at least get points for honesty?”

Carbone corrals the yuppie and launches into his patter, which has worked on many other professionals who are quietly–and in some cases not so quietly–proud of the business costume they put on each day.  “Say, Guv’nor,” he begins, “you lookin’ sharp in that suit today.  I always say–nothing like a chalk stripe to . . .”

“Sorry, I haven’t got any change,” the man says, but Carbone interrupts.  “You don’t need change–I use mobile point of sale terminals to make your donating experience quick and convenient!” 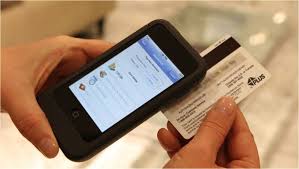 “Would you like a receipt for tax fraud purposes?”

The man gives the bum a once-over with a gimlet eye, then looks down at Carbone’s little machine.  “I take VISA, MasterCard, American Express,” Carbone says with a smile.

“Well, okay,” the man says as he takes out his wallet.

“Great!” Carbone says as he takes the man’s Boston Red Sox affinity credit card, which will entitle him to valuable points he can use to buy watered-down beer on his next trip to Fenway Park.  “Would you like this donation to go to our annual fund, or is there a specific project you have in mind?” he says with a leer, hoping to parlay the chance encounter to a multi-year commitment.

“Like what?” the more affluent of the two men asks suspiciously.

“My consumption of cheap ‘bum’ wine is unsustainable given current projections through the end of fiscal year 2018.  We’re hoping to fund a trust that will mean that bottle of Ripple will always be there for me when I need it.” 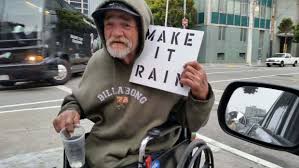 The man arches an eyebrow skyward as an angle he hadn’t previously considered occurs to him.  “What do you say I give you $5, but you give me a receipt for $50?” he asks.  “At my marginal tax rate of 36.9%, that means”–the man pauses as he makes a quick mental calculation–“an additional $16.65 that drops straight to the bottom line!”

But Carbone is unmoved, and in fact assumes an air of high dudgeon.  “I can’t believe you,” he says as he purses his lips and shakes his head.