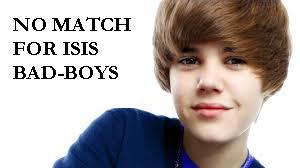 I like comedy in part because I can learn more by watching a 30-second clip of John Stewart than I can during an entire day watching MSNBC or Meet The Press. Comedians are more insightful because they actually question things.

There’s a female comedian of Pakistani descent in England who recently explained why teenage women leave Western countries to join ISIS. It’s not about religion, it’s about rebellion. Stuck in hellishly conservative families (like the one the comedian grew up in) these teenagers flee to Iraq and Syria to find a bad-boy rebel (or what she calls a “jihottie”).

I believe her. Look at the current status of Western bad-boys. You used to have James Dean and Ozzy Osbourne in America, Keith Richards in England. Today you have One Direction and the Jonas Brothers. Total lightweights churned out by a profit-seeking music industry. Having an endorsement deal with Xbox immediately disqualifies you from being a rebel badass.

Why does this matter? Because those teenagers becoming ISIS brides allow the group to have a future. Without them ISIS would become just like the GOP presidential field – a group limited to angry, clueless men trying to look tough. No women means no future. So how do we convince those teenage girls to stay home?

We outcompete them is how. Given the current lame status of Western bad-boys, we need to incentivize families to turn out troubled sons. So, we give those families a bad-boy tax credit. The more a son rebels and damages things, the bigger the tax break. Urge Johnny Junior to ‘go big’ and you could negate your whole tax bill for the year. Let’s look at an example:

Recently in South Boston two 21-year-old guys held a three-day party in rented house. The damage to the house was so extensive that authorities ruled it unsafe for habitation. The two guys are facing slew of charges, including furnishing alcohol to minors. A number of those minors were girls looking to party with some bad-boys.

And what does this mean? Yup, those girls are not on their way to Iraq to join ISIS. These two guys are doing their part. Your honors student son is not. But the Earned Bad Boy Tax Credit could change all that.

3 thoughts on “A Tax Credit To Defeat ISIS”