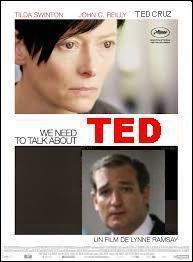 The creators of the movie We Need To Talk About Kevin have announced plans for a sequel. On Monday the filmmakers issued the following press release:

“We are filming a sequel that envisions Kevin (from the original movie) finishing his time in jail and then getting elected to Congress. The inspiration for the sequel is Ted Cruz — the parallels between him and Kevin are just too obvious to ignore:

* Kevin displayed little to no affection or moral responsibility towards his community. This is a perfect description of Mr. Cruz.

* Kevin made his parents extremely uncomfortable. They became wary and fearful of Kevin’s anger. Similarly, Mr. Cruz is despised and mistrusted by other members of Congress.

* Kevin had a propensity for destruction that eventually caused him to go all Burt-Reynolds-in-Deliverance at his school. Mr Cruz has attempted to cripple the federal government by causing it to shut down.

* Like Kevin with his little sister, Mr. Cruz lashes out at people who have far less power and influence.

Mr Cruz’s “parents” will suffer even more than Kevin’s did. The fantastic Tilda Swinton will portray the mother figure of Nancy Pelosi. They look close enough for it to work. Making John C. Reilly look like Harry Reid will be a stretch, but Mr. Reilly is such a professional that he will undoubtedly pull it off.

Look for We Need To Talk About Ted in theaters everywhere, summer of 2016.”

2 thoughts on “We Need To Talk About Ted”