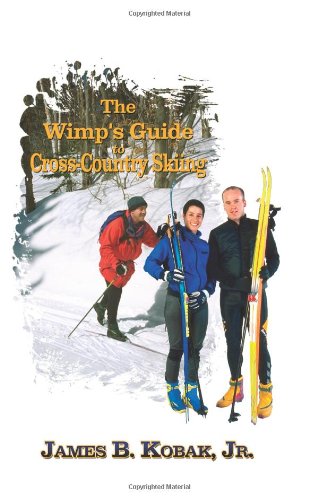 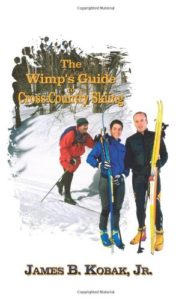 If HO has one thing it’s a plethora of attorney writers–or  is it writer attorneys? I think we should start our own law firm: Laughing with Lawyers.  What do you all think? Anyway, James Kobak was gracious enough to allow us to excerpt his book The Wimp’s Guide to Cross-Country Skiing   — Donna Cavanagh

Description and Author Bio: Written by someone whose credentials include falling into a Norwegian crevasse and having to be helicoptered out of the White Mountains through sheer clumsiness, this short but punchy book will be a delight to beginner and expert alike, to say nothing of armchair athletes. It makes a perfect gift for many occasions. The author, James B. Kobak, Jr., a New York author and attorney, has published humor and satire in national and regional publications including the New York Times, Washington Post, Christian Science Monitor, Travel & Leisure, Harvard Magazine, American Way, TWA, Pace, Adirondack and the New York Law Journal, among others. He is a graduate of Harvard College and the University of Virginia Law School and an Adirondack 46er. He has combined his trenchant wit with years of failure as a cross-county skier to provide a uniquely droll and readable perspective on this increasingly popular form of sport and exercise—or, as Mr. Kobak prefers to think of it, torture.

Most books about cross-country skiing claim that its basic techniques can be mastered by anyone in a few minutes and that those techniques can be enjoyed for a lifetime.  This book is different.  It tells the truth.

This book does something much more important.  It allows you to stay inside and read it in a warm, secure place such as a library, a train station or a hotel room rather than venturing out into the cold, slippery snow.

So buy this book, take it up to the hotel room, and read it several times.  Put your feet up.  Order a pastrami sandwich and a couple of beers from room service while you’re at it.  It will probably save your life.  And this, after all, is the only proper environment in which to appreciate cross-country skiing.

Of these rules, only the last makes a particle of sense.  After all, who would lay out good money to buy skis for an iguana or stuff an aquarium full of goldfish into a backpack? The others are paradoxes, non sequiturs and contradictions in terms worthy of a Zen master.  Together, however, they seem to spell out one clear, unequivocal message: now that you have paid the ski area’s use fee and rented its skis, please don’t set foot on its trails.  And of course that is the kind of message any intelligent, well-mannered person instinctively obeys.

It all began with the discovery of snow, upon which Gustav Mahler stumbled while yodelling in 1884.  Mahler chuckled so hard over the score of “Til Eugenspeil,” which is what he had been yodelling, that years elapsed before the significance of his discovery could ‘ be understood.  Finally, however, Anton Bruckner, Cosima Wagner and Richard Strauss decided to follow Mahler’s footsteps, wet and icy though they were.  Unfortunately, they were all rather loud yodellers and caused many avalanches.  Igor Stravinsky eventually solved the problem of getting past an avalanche by attaching bassoons to his hiking boots.  And so was born the sport of cross-country skiing.  (The sport was originally called cross-country Stravinskying but shortened its name when it came to America.)

The novice will want to familiarize himself or herself with these critical dates in North American cross-country skiing:

circa 1400: a band of dissolute Vikings skis the Canadian Laurentians, which they litter with containers of goats’ milk

1492: Christopher Columbus skis portions of the Appalachian Trail but is unable to find a path suitable for herringboning the Nina, the Pinta and the Santa Maria over Mount Katahdin

1525: Vasco da Gama traverses the Appalachian Trail; da Gama expires of blisters at Stone Mountain, Georgia, as the result of having skied over one thousand miles of dry, snowless terrain

1759: a Frenchman, Pierre Cardin, and an Indian, Vijay Armitraj, simultaneously attempt to rent the same pair of ski poles at Bear Mountain State Park; this leads to the French and Indian War; for reasons no one understands, the British, who were not even in the war, are declared winners

1805: Lewis and Clark are commissioned by Thomas Jefferson to explore golf courses suitable for cross-country skiing in the western United States; among other things, they discover Gerry Brown attempting to chisel his portrait into Mount Rushmore; Lewis eventually comes to a tawdry end in a Santa Monica hot tub filled with Swix Silver Blue, and Clark becomes president of Sail Boarders for H. Ross Perot.

1904: Theodore Roosevelt climbs Mount Marcy on the winter solstice, becoming the first person to climb the Adirondack 46ers on cross-country skis; Roosevelt is immediately declared president of the United States and rushes off to Washington, leaving William Howard Taft to clean the pots, unwax the skis and settle up with the rental shop

New skiing terrain behind the former Iron Curtain has recently been discovered by a group of retired schoolteachers from New Paltz, New York.  The schoolteachers actually intended to view the Sistine Chapel in Rome.  As chance would have it, however, their cab driver, Lorenzo Uffizi, now known to history as Lorenzo the Magnificent, could hear their cries of “Murals!” only indistinctly over the roar of his mufflerless Fiat and interpreted them as a command to be driven to the Urals.  “Basta! Basta!,” shouted the quondam geography teacher as Lorenzo passed border after border with nary a thought for his brakes.  To Lorenzo’s ears it was all “Pasta! Pasta!,” and he loaded up on spinach linguini at a roadside restaurant outside of Syktykvar.  The journey not only revealed hundreds of miles of previously unexplored hillsides and outruns but also became the most expensive cab ride in history.  Lorenzo, however, was reported to be disappointed at the size of his tip.

One thought on “Excerpt from HO’s James Kobak: The Wimp’s Guide to Cross-Country Skiing”