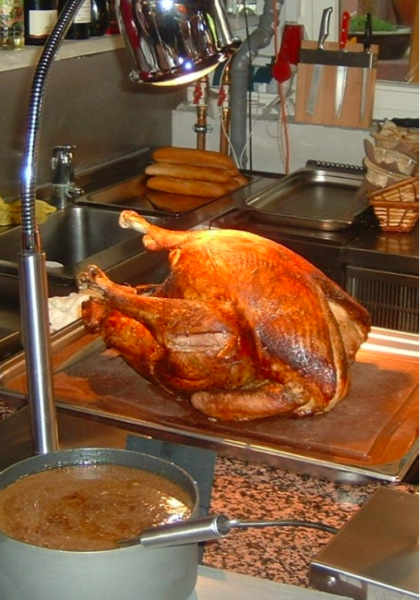 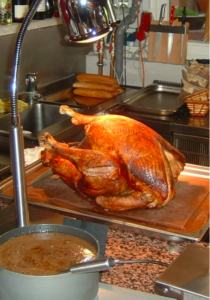 When I walked in the door, my heart fell into my stomach. Not literally. That would be a condition known technically in medical circles as “death.” I wasn’t dead; I was just dying inside. Again, not literally.

It was almost noon Thanksgiving morning, and my wife and I had just walked into her parents’ house. This late, and I didn’t smell even the faintest hint of roasting turkey, one of my favorite aromas in the world, and I thought, “Uh oh, we’re in trouble. Turkey trouble.”

My wife’s relationship to her parents was storied and precarious, so we were not on the sort of terms where we could ask, “What are we doing about the Thanksgiving dinner you invited us for, that we drove all morning from another state for?”

And they didn’t volunteer any information about meal plans either.

I began to wish I hadn’t skipped breakfast to leave room for the huge anticipated feast.

About 2:00 my in-laws indicated we were going for a drive. There was no mention of food, no reference to dinner whatsoever. They drove us around town for nearly an hour. Literally. At one point, they drove us all the way around a large nursing home building. Drove very slowly and interestedly, and I thought, “Oh my God, is this where they’re taking us to eat?” But then we drove away, and I exhaled in relief.

OK, so this year there would be no home-cooked turkey for me. “It’s not the end of the world,” I said to myself. Maybe they’re taking us to a nice restaurant. But, no, they were not taking us to a nice restaurant. Maybe they’re taking us to a medium-level chain restaurant, say an Applebee’s or a Ruby Tuesday’s. No, not that either. Just before 3:00, my father-in-law drove back to the nursing home that we had circled earlier, and this time—he parked. We were going to have Thanksgiving dinner at a nursing home that had opened up its dining room to the public for the holiday. An assisted living facility, an institution for those of an advanced age, a home for old folks. From a certain point of view, I was going to get what I expected—a home-cooked meal; I just hadn’t expected it to be a nursing-home-cooked meal.

Why had we driven around the building earlier? I never did figure that out.

To be fair, the nursing home dining room was probably, under usual circumstances, an attractive one, even having a double fireplace in the center of the large room. But these were not usual circumstances. My guess is that there had been hourly shifts beginning at 11:00 a.m., which would mean we were there for the fifth shift. There were signs everywhere of an overwhelmed, exhausted staff. Many empty tables were still covered in what looked like battle carnage. Bits of uncleared turkey carcass and spatters of gelatinous cranberries all around us. Most of the tables remained uncleared during our entire delightful stay.

Only fifteen minutes after we sat down, our waiter appeared and took our drink orders. We never saw him again. We never saw any waiter again until about twenty minutes later, after Dad-in-law went to see what had happened. Apparently, our first waiter’s shift had ended, and he had failed to pass us on to anyone else.

At 4:10, just as I was fainting, the food arrived. My first food of the day. It was OK—for cold, dry institutional food—but of course there’d be no leftovers, no turkey sandwiches that night, no heated-up stuffing. In fact, no food was offered that night. Why should there be any supper when we hadn’t finished dinner until 4:30?

That night, as my stomach grumbled, I counted my blessings. I gave thanks for the wonderful opportunity to work on my food addiction. Gave thanks that my wife is so much more holiday-oriented than her parents. And I even thought my way through my disappointment over not having what I considered a traditional Thanksgiving. I re-envisioned the experience. I came to think of it as Thanksgiving at Grandma’s house. Only in this case—two hundred grandmas’ house.

What could be more traditional than that?