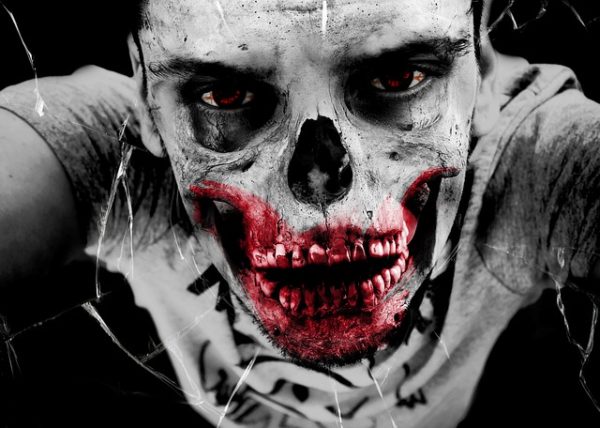 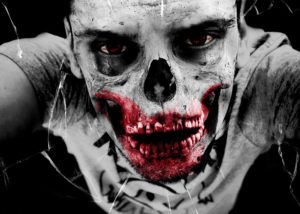 It only stands to reason: the zombie apocalypse, when it happens, will be due to insomnia and sleeplessness.

Think about it. The U.S. Centers for Disease Control has already declared sleeplessness a public health epidemic, reporting in 2013 that while adults need seven to nine hours of sleep a night, one out of three of us routinely gets less than seven.

I’m one of them. And when I’ve had only five or six hours of sleep, I not only look like one of the undead but also feel like an animated human corpse, ready to rip the throat out of anyone who crosses me. And it doesn’t take much to set me off (just ask Hubs).

Oh, to sleep eight hours!
Three a.m. awakenings
are for the damn birds.

We baby boomers are particularly prone to sleep problems for a variety of reasons, including changing circadian rhythms as we age, poor sleep habits, menopause-related night sweats, medications, and health issues like an enlarged prostate and apnea that wake us at night. The current state of political affairs in the U.S. doesn’t help, either.

So, given the prevalence of sleeplessness, it’s only a matter of time until we reach the tipping point when sleep-deprived creatures engage in a full-on assault on civilization, right?

Hell, now that I think about it, maybe the apocalypse is already here—which certainly explains the GOP’s actions lately. Maybe those (mostly) older white men would be more human humane if they got a good night’s sleep more often instead of staying up until all hours devising ways to screw over women, the poor and the disenfranchised.

And if #45 would sleep more, maybe we wouldn’t be assaulted with his middle-of-the-night tweet-storms.

But that crap aside, there’s a scary correlation between unhealthy sleep patterns and conditions such as diabetes, obesity, heart disease, high blood pressure, and depression and other mental health issues. Lack of sleep also can lead to faster aging of our brain cells—contributing to dementia and Alzheimer’s disease, which now claims the lives of one in three seniors.

In other words, sleep isn’t a luxury. On the contrary: a professor of neuroscience and psychology at the University of California, Berkeley opines, “Sleep is the single most effective thing you can do to reset your brain and body for health.”

In fact, lack of sleep can cut our lives short. A recent study showed sleep deprivation in mice causes death faster than starvation.

A human study of more than 1 million healthy men and women suggested the optimal amount of sleep for longevity was seven hours a night—and people who slept that amount were most likely to be alive at the end of the six-year study, versus those who slept for either six hours or less, or eight hours or more.

Another study followed over 21,000 Finnish twins for 22 years. It found people who regularly slept less than seven hours a night were 21% to 26% more likely to die of any cause compared to those who slept more than eight hours.

The good news is that there’s a lot of sleep research going on, spawning insights into how sleep works, how it affects us, and how to get more of it. There’s a great article from Time Health entitled “The Sleep Cure: The Fountain of Youth May Be Closer Than You Ever Thought” that explains some of this research.

One of the most interesting things I learned is that, contrary to the long-held assumption that our brains and bodies need downtime to recharge after a busy day, sleep’s primary function is to flush our brains of accumulated debris. The Time Health article describes it this way:

“Neurons pulse with electrical signals that wash over the brain in a rhythmic flow. The brain runs checks on itself to ensure that the balance of hormones, enzymes and proteins isn’t too far off-kilter. All the while, brain cells contract, opening up the spaces between them so that fluid can wash out the toxic detritus that can cause all kinds of problems if it builds up.”

Put another way, sleep is a vital biological rinse cycle—not a passive state in which our mind and body simply zone out. And gawd knows, I’ve got a shit-ton of detritus that needs flushing from my brain after watching the news on any given day.

Sleep also plays a critical role in our mental health. It helps our brain process emotions attached to memories, so we can be more objective in recalling an experience without reliving it. Without deep sleep, we continue to carry around emotional baggage attached to certain memories (like how #45 continues to bring up the size of his inauguration audience).

There’s evidence that PTSD is a condition in which this sleep-induced “flattening” of emotional memories fails. Doctors also increasingly believe that sleep deprivation may be a trigger for other mental illnesses including depression, bipolar disorder and schizophrenia.

We also know that stress accelerates aging, and a sleep-deprived body resembles one that’s stressed out—in perpetual fight-or-flight mode. Chronic stress, in turn, triggers inflammation, which is a culprit in all the diseases I mentioned earlier.

It all adds up to this: getting a good night’s sleep is more than a good idea. It’s essential to our health and longevity. And avoiding the zombie apocalypse.

There’s no shortage of advice on how to sleep better—just ask Dr. Google (and I know she’ll tell you that turning off our devices at least an hour before bed is a good start). But I’m wagering that a change in our country’s leadership would go a long way in helping many of us sleep better, too. We just have to stay awake—and alive—until the midterms.

What do you think? Do you walk around feeling like a zombie most days due to lack of sleep? What keeps you up at night? Or are you one of those enviable folks who get a full seven or eight hours of sleep a night? What’s your secret? Please share…

4 thoughts on “I’m blaming the zombie apocalypse on sleeplessness”