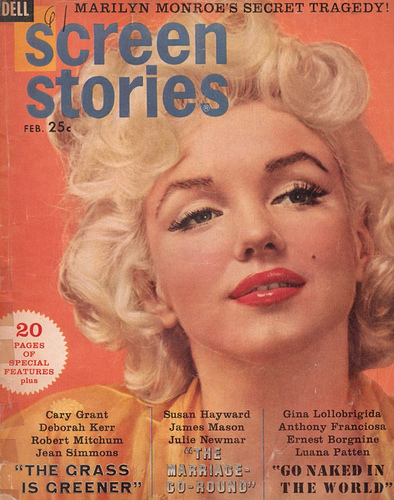 Riding a roller coaster with your partner makes you more attractive to each other.
People (5/1/17)

Taking a hot bath burns as many calories as taking a walk.
People (5/1/17)

President Trump reportedly selects his Cabinet officials in part based on whether they “look the part” for television.
New York (4/17/17)

Frank Sinatra thought Dominick Dunne was such a phony that he once paid a hit man fifty dollars to punch the writer in the head to dislodge the toupee he wore to cover up his bald spot.
The Gay & Lesbian Review (5/17)

Companies in British Colombia are no longer allowed to require their employees to wear high heels to work.
Time (4/24/17).

Glenn Beck owns a piece of the coat President Lincoln was killed in.
Rolling Stone (11/3/16)

People who give up social media for a week feel more content.
People (5/1/17)

(Roz Warren   is the author of Just Another Day At Your Local Public Library: An Insider’s Tales of Library Life.)

3 thoughts on “Marilyn Monroe, Frank Sinatra And A Nice Hot Bath: What I Learned From Magazines This Week”