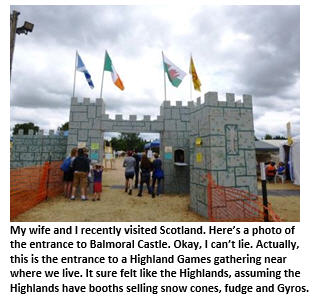 Recently, my wife and I spent a day exploring Scotland. Okay, technically we didn’t actually travel all the way to the land of Braveheart. But we did the next best thing: We went to a traditional Scottish Highland Games. If you’ve never been to a Highland Games before, it’s a lot like Game of Thrones, but with seriously overweight people who can’t get dates and have no business wearing kilts, along with booths selling Haggis, meat pies, and funnel cakes. But unlike Game of Thrones, I’m happy to report there were very few fatalities.

My wife is Canadian. Her grandmother immigrated to Canada from Glasgow, Scotland with quite a set of pipes – bagpipes, that is. Every visit to Grandma’s included a concert of bagpipe music, complete with Amazing Grace as the grand finale. Apparently, this is how they punish children for misbehaving in Canada.

It turns out I too have some Scottish ancestry – 1/8th – which qualified me for 10% off on a raspberry scone at MacGregor’s Scones ‘n Cones at the fair. My lineage is through the Hanna clan and can be traced all the way back to the year 1215, to a tiny town in southwestern Scotland called Sorbie. (True!) There is even a 15th century castle there that belongs to my clan, but it’s largely a ruin now. It figures. My ancestors never took good care of their stuff.

To venture into the Games, we traversed a rickety drawbridge through towering castle walls all made from traditional Scottish plywood, reinforced with authentic Scotch Tape. I could smell the earthiness of moors as we passed the Honey Bucket porta potties. I started to tear up as the strains of a tartan-clad marching band wafted through the air. I could imagine my ancestors trading their wares as I meandered past vendors hawking t-shirts and mugs with expressions like “If it’s not Scottish, it’s Crap.” 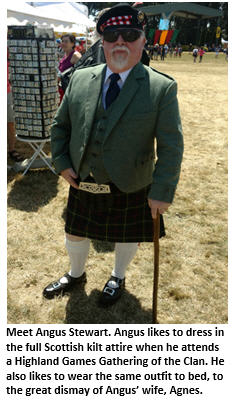 First, we checked out the sheep herding trials. Trainers shouted in gibberish, I mean Gaelic, commanding their Border Collies to steer a small flock of sheep through an obstacle course. After 45 mesmerizing minutes, I gleaned that the dog’s primary objective was to stare at the sheep as they wandered aimlessly hither and yon, while it ignored all edicts from the trainer.

Next up was the Scottish version of the Olympics which they call the “Heavy Events”, no doubt because every competitor weighed in at 350 pounds minimum. These strength contests included the sheaf toss (heaving a bale of hay over a bar using a pitch fork) and the caber toss (hurling what is effectively a telephone poll in the air so it flips 180 degrees). I quickly realized why the Scots never win any Olympic medals – they’re training for all the wrong events.

Every contest required the male competitors to wear skirts, excuse me, kilts, displaying the tartan colors of whatever clan they represented. Looking at these large men in their girly attire, one thing was obvious: Any one of them could have easily beaten the crap out of me.

Next it was off to the Highland Dancing Competition. The highlight was the Sword Dance, where 7-to-15-year-old girls execute a series of precise steps. Sounds easy – only they have to avoid touching the two swords placed in an X beneath them. I sat through 20 rounds and was utterly disappointed. Not one of the kids grabbed a sword to challenge another competitor to a duel.

Of course, no Highland Games is complete without the endless droning of bagpipes throughout the day. No wonder the Scottish have a reputation for violent outbursts. It’s from all the non-stop piping. I’d be pissed too if I had to listen to my neighbor’s kid practicing the bagpipes five hours a day. 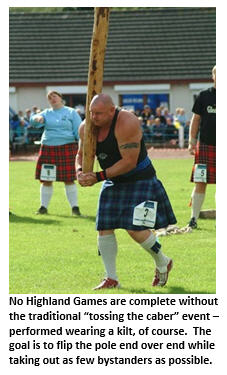 Perhaps the most entertaining part of any Highland Games is the people-watching. Where else could you see hundreds of manly men proudly strutting around in their traditional kilts with t-shirts that read “WARNING: Objects under KILT may be larger than they appear.” Many wore the full regalia, down to the sporran and the dagger tucked in their argyle socks. They take their Scottish heritage seriously. I just wish more of them took the concept of wearing underwear a little more seriously.

Over the course of the afternoon, my wife and I took in many of the sites that you’d find in Scotland, except for any highlands. I could imagine my great, great, great, great [insert about five more greats] seanair (that’s Scottish Gaelic for grandfather) Fergus Hanna of Sorbie tuning his bagpipes, tossing hay bales with one hand and whisky shots with the other, getting sozzled.

As Fergus gazed proudly upon his flock, perhaps he was reminded of an affront the Hannas suffered 200 years earlier from a member of the cantankerous Campbell clan, probably involving sheep – and maybe he began plotting his revenge. I could feel his wrath well up inside me as I swelled with Scottish pride. “I will avenge yee, Fergus of Sorbie!” I cried – as I swatted the fly that dared dishonor my authentic Scottish funnel cake.

4 thoughts on “My Visit to Authentic Scotland (Sort of)”