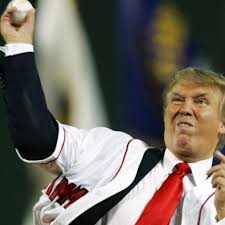 We have a new president.  In a few days a new baseball season will also be upon us.  With it will come yet one more unforeseen presidential responsibility for the new incumbent:  the probability that he will asked to make the ceremonial first pitch on Opening Day.
Only Steve Bannon or possibly Ivanka would know for sure, but as with so much in Washington we can only speculate about what may happen when President Trump has a hard projectile in his hand.  And speculations suggests the event would go something like this:
“It was awesome and the fastest first pitch ever recorded on a radar gun,” declared the President as he stepped off the pitcher’s mound.  “By the way, I believe radar guns, like other guns, are protected by the Second Amendment, and under my administration everyone can own one.  Our Founding Fathers were wise, so wise, to provide for our future safety even when radar and even baseball hadn’t yet been invented.”
Videotape and fans’ recollection of the widely watched event seemed to agree that, in fact, as with many presidential first tosses, the ball was lobbed in a leisurely manner, landed six feet in front of home plate and barely dribbled to the catcher’s mitt.  Presidential spokesman Sean Spicer explained to the three bloggers allowed to attend a White House press briefing, “President Trump played fair and square, but the game is rigged in favor of younger players with good musculature and hand-eye coordination.  And the catcher—or so-called catcher—was hired by the CIA and surreptitiously covered home plate so Donald couldn’t see it.”
“Shameful,” tweeted the President.  “The umpires I appoint will call that pitch and every pitch I throw a strike.”   ESPN reports that the President refused to give the ball to the catcher or donate it to the Hall of Fame after autographing it, preferring to have the Trump Organization sell it on eBay.
“It was big.  Bigger than Babe Ruth,” the President said of his effort over dinner at Mar-a-Lago. “ It would have been even bigger if they had let me bat—I can hit the curve better than both the Clintons combined—but because of Obama and his big ears and narrow head they couldn’t find a POTUS batting helmet that would fit over a brain-packed cranium and hairstyle like mine.”
Asked for suggestions about the national pastime, the President replied, “ I could make it great again, so great, like it used to be before Obamacare gave so many players the chance to go on injured reserve.  Great like it used to be before we let all those immigrant players from Latin America into the game.  No more stolen signs.  No more stolen bases.  No more suicide squeeze plays.  I’m for right to life and law and order.  Huge white sluggers hitting home run after home run over walls modeled on the beautiful border wall Mexico is going to pay us to build.  That’s what Vladimir Putin and the people who voted for me want to see.  The ratings will be nearly as high as when I was on Celebrity Apprentice.  And just you wait, I will win the Emmy and re-election  in a landslide.”
Share this Post:

One thought on “President Trump: Bigger than the Babe?”