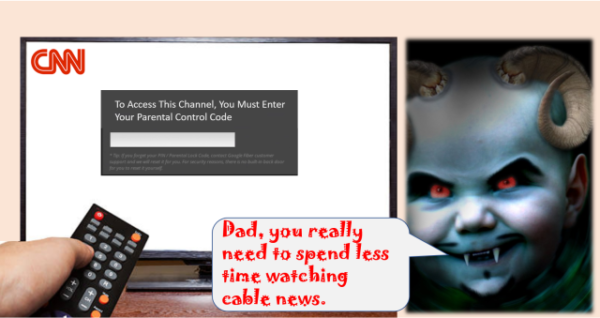 Does anyone know a good exorcist? My son is the spawn of the devil.

I first discovered this years ago playing a game called, “Scattergories” with another family.

This game, if you are not familiar, involves thinking of words that begin with a particular letter and fit a particular category.  The letter in this round was ‘M’ and the category was Languages.   My son, who was ten at the time, came up with, “Melric.”

“It was a language used by the ancient Egyptians,” he explained.

Everyone looked at him curiously.  Our friends said they’d never heard of it.

“No, it’s true!” he explained.  “Robert’s sister was doing a report on ancient Egypt and we were helping her and it was in the book.  Really.  You can look it up.”

By all appearances my son was a model young citizen – honest and thoughtful and well-behaved.  My friends shrugged.  Whatever.  Melric.  Learn something new every day.

The next day however, I did look it up.  There was no language called Melric.   I confronted him in my best parental tone.  “Hey, guess what?  I can’t find your damn Melric.”

From that day forward, it was clear there was a malevolent force in our house.

One day I picked up the TV remote and turn to CNN and it prompted me that I need to enter the parental passcode to watch.   Weird!   I’d set that for the movie channels.   I switched to MSNBC.  Same thing.  What the heck!  I entered the passcode and it said, “The passcode you have entered is incorrect.  Please try again.”

“What the hell!” I am now jamming the remote in the hopes that depressing the buttons more emphatically will convince my cable box of the importance of my watching CNN.  “DAMMIT!”

“You know,” my son says, “you really need to break your addiction to cable news shows.”

My son sighs.  “It’s not that important,” he says calmly.   “It’s just a bunch of people arguing with each other.”

I am battling the remote like a deep sea fisherman fighting a marlin.   And yet, in the back of my mind, something registers.  Something about my son’s shrug.  His sigh.  I turn to him.  He turns to me.   I look suspiciously down into his eyes.   He looks innocently up into mine.

“What Did You Do?” I asked.
“Me?”
“You little monster!”
“Well, you really do need to stop watching so much cable news.”

He had watched me type in the parental control code, then used it to set CNN and MSNBC as stations that required parental approval, and then changed the code so he was, in effect, the parent.

Next he changed the ringtone on my phone to that rap song by Sir Mix-a-Lot, and then called me when I was in a meeting at work.  There we are in a conference room discussing next year’s budget when suddenly my phone shouts out, “I Like Big Butts and I Cannot Lie…”

“Excuse me,” I said to everyone in the conference room, who were now staring at me rather peculiarly. “I need to take this call.”

Soon he had recruited his younger sister.   I left my computer logged in to Facebook and she changed my status to, “I’m feeling naughty.”

Note to Facebook friends:  If and when I am feeling “naughty,” I will not make a public announcement about it.

Of course, my son is grown up now.  And yet once again, my family is playing Scattergories.  This time the category is, “Parts of the body.”  The letter is “W”.

My wiser, older son picks, “Wang.”
“What?”
“Wang,” he says casually, confidently.
“That’s not a real word.”
“Of course it is.  What are you talking about?”
“Find it an anatomy textbook.”
“It doesn’t have to be in a textbook.”
“Okay, use it in a sentence.”
“He had a really big wang.”
“No way!  Wang is slang.”
“Who says you can’t use slang?”
We argue back and forth.  Finally he turns to me.  “So what did you come up with?”
Now it is my turn to assume an air of confidence.  “I came up with, ‘webbed foot.’”
“What???  That is not a body-part!”
“It is if you’re a duck,” I say.  “It never says it has to be human.”
“It says, ‘the body.’  That implies the human body.”
“That’s just because of your narrow way of thinking,” I explain. “You really need to learn to think outside the box.”
“Thanks for the life-coaching lesson,” he says.  “That’s really, really helpful.  But ’webbed’ is still just an adjective.  The body part is just the foot.”
“Thanks for the grammar lesson,” I reply.  “That’s even more helpful.”
“I can’t believe you’re getting all indignant about ‘wang’. And you did ‘webbed foot’!”
“Wang is slang!”
“Webbed is an adjective!”
“You’re an idiot.”
“You’re the spawn of the devil.”

Needless to say, we are still having this argument.  And he is so wrong!

I only hope that someday he has his own demon son.  My beloved demon grandson.  Then he will know what I have had to endure.