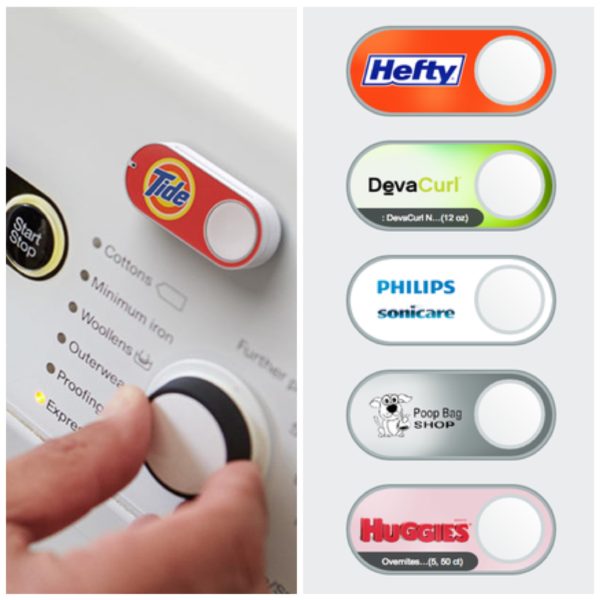 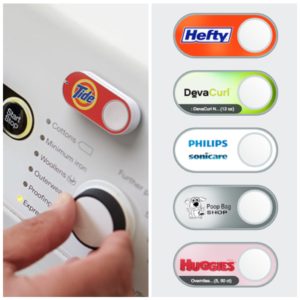 My wife goes along with my random ponderings—theories about the universe, why things happen as they do, world issues and, of course, why American life isn’t complete without Amazon dash buttons.

“Have you seen those buttons?” I asked my wife before telling her what I was even talking about. “I think they’re gonna save the world.

“They’re WiFi-connected buttons the size of a pack a gum that you sync with your Amazon Prime account and link with replaceable items in your house like toilet paper, soap, sponges, snacks, trash bags, sandwich bags, drinks . . . more snacks—you name it.

“Then you place, for example, the Oreo cookie button in the pantry near our Oreo cookie stash, and when the supply runs low, you press the button. Like the bat signal for Batman, Amazon is notified, and they save the day with a new batch of Oreos at our doorstep before we have to worry about not wanting to go to the store for more. It’s fantastic, right?

“Supposedly, they’re like $4.99 a piece,” I said to my wife who seemed to be listening—she was looking at me. “And with our Prime membership, shipping the items is free. Why wouldn’t we do this?

“I guess we’d have buttons all over the house,” I said. “And what if we accidentally bumped a button? We’d randomly be getting extra shipments of toothpicks, and it’s not like we’re going through toothpicks like crazy. I think we still have the same box we bought during Y2K.

“Or what if you pressed a button for paper towels unbeknownst to me, and then I pressed the same button right after that unbeknownst to you, and we end up with a pallet-load of paper towels and no room to put them anywhere? That’d be worse than shopping at Costco.

“Does it seem kinda lazy, though?” I asked my wife, who still hadn’t said a word. “It’s like that movie ‘Wall-E’ coming true, with everyone doing nothing but pushing buttons.

“That reminds me,” I said, now in full pondering mode. “We have a 14-year-old boy in our house. He and his friends would be pressing buttons on whatever they wanted whenever they wanted it, especially if we got an Oreo cookie button. And you’ll just have to believe me when I tell you he and his friends are the ones pressing that button all the time and that I’m not the one eating all those sweet, sweet Oreos. I bet his friends would push our buttons as a joke, and we’d get hit with the bill.

“I wonder if they have buttons for clothes,” I said as a way to really get my wife into the conversation. “I hate clothes shopping just as much as you hate clothes shopping with me. If we program some buttons to have my sizes and styles, you can just push them whenever you’re sick of being around a husband with faded, worn and torn shirts and pants, and voila!, new clothes and even shoes in a couple days, headache-free.

“That reminds me,” I remembered aloud. “We still have that 14-year-old in our house. He’ll be pressing buttons for clothes and shoes like they’re going out of style. And as you know, styles are always going out of style with him.

“Maybe there’s a button we can press that locks the buttons when we don’t want buttons to be pressed.

“Hey, wouldn’t it be cool if there was a button at work we could press, and in a day or two we just get a day off? How about buttons next to our pictures of friends and family in the hallway: We press the buttons of those we want to see, and they show up. Of course, we’d need another button to make them go away after a week or so.

“The possibilities are endless,” I said. “I suppose they could be pretty limited, too. Maybe these buttons don’t even exist. I don’t even remember who told me about them or if he—or maybe even she—is even credible.”

My wife seemed to be going through her own thoughts on the subject. When I finally stopped talking in order to recall whom had told me about the buttons, my wife waited a beat, and then she hit a button we already had in the house—the PLAY button on our remote for the DVR. And she got back to the show I’d interrupted when I bombarded her with my latest random pondering.

This story appeared in The Acorn Newspapers of Los Angeles and Ventura counties, CA, in July of 2017. You can find other stories like it from Michael Picarella in his book, “Everything Ever After (Confessions of a Family Man),” and at MichaelPicarellaColumn.com.

4 thoughts on “Wife not pushy about Amazon dash buttons”