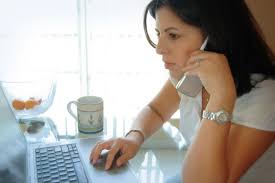 According to the US Census Bureau, most men who use online dating services are pathetic losers who exaggerate their personal net worth and physical attractiveness and couldn’t strike up a conversation with a woman in a social setting if they fell on top of one.  The woman, that is, not the setting.

“This guy is such a total dweeb!”

Still, that’s no reason to give up on the biggest breakthrough in courtship since chaperones became extinct due to over-fishing in the 19th century. Online dating can be a safe and rewarding experience, but experts say it is sometimes best to bring along an on-line “wingwoman” in case you need somebody to drive you home from your den to your bedroom at the end of an evening of poking and winking at men you don’t know. 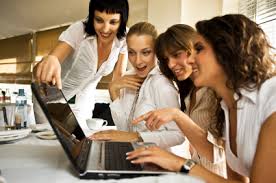 Which raises two questions. First, when should you bring a buddy along on an online “date night.” And second, how exactly does one become an “expert” at on-line dating. Is there a Ph. D. program somewhere where you can master this academic discipline? 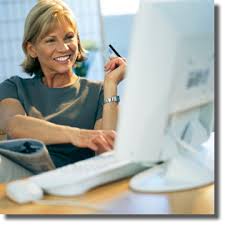 “He’s cute, in a desperate kind of way.”

This article will focus on the first question, because the second is too absurd to contemplate.

1. Tempted to wink? Friends make you think. Having a girlfriend around to look over your shoulder when you’re tempted to wink at a man just because of his zodiac sign can help you stop yourself from making a costly mistake. “I say to my girlfriends–‘Yes, he’s right-handed, but you need to have more in common than that to make a relationship last,’” says Kathy Butler of Tarkio, Missouri. “Unless each of you also lists ‘Arm-wrestling’ as your hobby.”

2. Friends around can help you rebound! You’ve mustered up the courage to contact someone who appeals to you, but it’s been days, weeks, months or even years and you still haven’t heard from him!  “I say ‘Get over him, girl’,” says Chantel Poindexter, of Fall River, Mass. “He was never nuthin’ but a bunch of electrons on a screen to you anyway.” 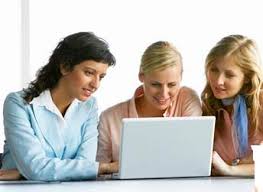 “I don’t think he’s right for me, but let’s see if we can talk him into giving us his credit card number.”

3. Narrow your parameters to a reasonable diameter. You can become overwhelmed when your profile produces matches numbering in the millions. The problem may be that you weren’t specific enough about what you’re looking for. “My girlfriend Liz was so depressed after her boyfriend dumped her all she could bring herself to include in her ‘Looking for’ box was ‘Employed, breathing,’” says Jane Cahill of Lansing, Michigan. “I told her to add ‘Must have car,’ which reduced her matches from 5 to 3 million.” 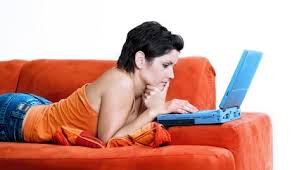 4. A “second set of eyes” can find a surprise! If you have a friend who’s also looking on-line, have her act as “scout” for men who may be matches for you but not her. “I have found this a great way to make two people happy,” says Jo Lynn Perry of Ottumwa, Iowa. “My girlfriend is happy to get the referrals, and the convicts I hear from are glad to know that someone shares their interest in convenience store security camera technology.” 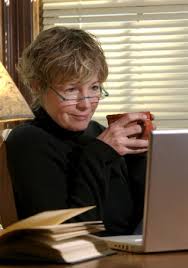 “‘Still have most of my original teeth’–that’s a plus!”

5. How to tell when you’re sloshed. Friends don’t let a friend email total strangers when her blood alcohol level reaches “beer pong” levels. Remember this basic sobriety test: If the empty white wine bottles laid end-to-end are longer than your height when you’re lying down, turn off the computer and pass out.

2 thoughts on “Do You Need an On-Line Dating “Wingwoman”?”