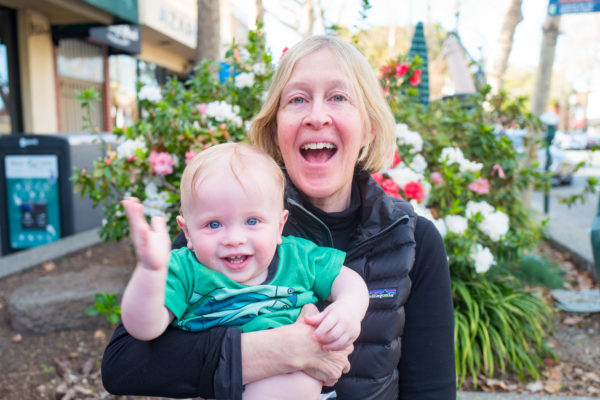 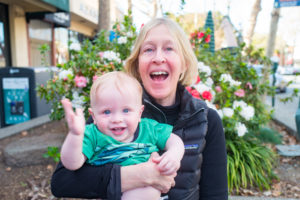 At the airport recently, I fell into a conversation with a fellow my age as we waited  for our plane to board. Within two minutes we’d pulled out our smartphones and were showing each other photos of our grandchildren.

Why? It is a truth universally acknowledged that the moment you become a grandparent, it becomes imperative that you show everyone whose path you cross photos of your grandchild.

“Do you take this flight often?” he’d asked.

I saw my move and took it. “Yes!” I responded. “I’m flying to California to visit my grandson. Let me show you his photo!”

His face lit up, he brought out his own phone and he scrolled to a baby photo. And we were off!

We both knew exactly how this would play out:

He, a total stranger who I would never see again, would show me a photo of a baby. I would admire her. Then he, in turn, would admire photos of my grandson. After several minutes of oohs and aahs, and immense satisfaction on both sides, we would return to our respective lives.

Yup, I’ve become one of those.   A Grandparent Who Will Force You to Look at Photos of Their Grandkids.

There is no escaping me. If we spend any time together, you will view a photo of Benji. I’ve showed his fetching little face to co-workers, strangers on the bus, the dental hygienist before I’d let her clean my teeth and of course, my plumber.

I feel sorry for grandmas who lived in the pre-smart phone era. They, poor souls, had to carry grandchild photos in their wallets.

And before that? I’m sure that Grandmas have always managed.

“Would you care to see this tintype of my grandson?” I imagine one 19th Century grandma saying to another. “His face is blurred because to get a good image you need to sit perfectly still for 20 seconds, and no baby can do that. Still — isn’t his blurry little face just precious?”

(If any of the artists who created those prehistoric cave paintings were grandparents, I’m sure that among the drawings of rivers and birds and trees you’ll find drawings of adorable grandkids.)

I have a full and happy life.  I have a great job, and wonderful family and friends. But when I meet you, I won’t insist on showing you a photo of my best friend or my sister or the library where I work.

But you’re damn well gonna see a photo of Benji.

Why? I think we’re hardwired this way. Evolutionarily, people are programmed to have kids and raise them to maturity. If we’re lucky, we get to be around long enough to see our kids have kids.

Which is to say that evolutionarily speaking, we grandparents have hit the jackpot. And with that comes the need to show off.

I recognize that there are people who don’t want to drop what they’re doing to look at photos of my grandson. Who cares? They’ll see them anyway. (Even if I have to tackle them, then sit on them and hold my phone in their face until they say, “That baby is really cute.”)

You will not only look at photos of my grandson, you will admire him!

In turn, I will, of course, gush over photos of your grandchildren. I admired photos of my friend Maria’s granddaughter for three entire years before she had to start admiring photos of Benji. And I was happy to do it!

But what if your grandchild isn’t adorable? Don’t be ridiculous.  As far as we grandparents are concerned, all babies are adorable.

My good pal Liz, who never got hitched and doesn’t have grandkids, has no patience for any of this. She even states clearly on her Facebook profile. “Do not show me pictures of your grandkids.”

Did I haul out my smart phone and show her a photo of Benji the first time I saw her after becoming a grandma?

Of course I did! Her desires in this matter pale in comparison with my compulsion to share Benji photos with the world.

My son and daughter-in-law married young. If Benji also marries at age 22, and has kids promptly, one day I might be able to force Liz to look at photos of my great-grandchildren!

I’m looking forward to that.

(Roz Warren wrote this essay for the sole purpose of sharing a photo of her grandson with you. That’s Benji in the photo that illustrates this piece.  You’re welcome.)

13 thoughts on “Want To See A Photo Of My Grandson? Of Course You Do!”