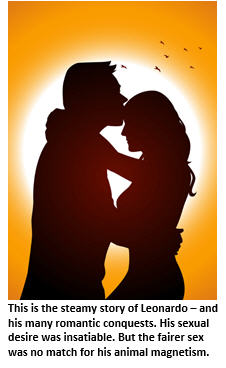 When I was a young child, I had a very unusual friend who, how should I put this delicately – had some rather strong urges. His name was Leonardo. I met him when I was in seventh grade. Leonardo was the unemotional, quiet type. But there was one thing I noticed that was a bit odd about Leonardo. He seemed to have an unusual sexual appetite, particularly for someone so young. He fooled around a lot. When it came to romance, Leonardo was an animal.

He pursued sexual relationships with too many partners to recall. There were Lucy, Angel, Daisy, Chloe and Pepper, to name a few. But Leonardo didn’t always stay in his own lane. There were also Charlie, Toby and Max, and many others. Honestly, I couldn’t keep up with Leonardo’s endless series of objet’s d’amour.

His relationships never seemed to last very long. As soon as he got bored with one partner, Leo, as I called him, was off to his next roll in the hay. This went on for years. From what I could tell, he never gave these dalliances a moment’s reflection. Before long, Leonardo was off in search of his next Mona Lisa.

To be honest, I never said anything to Leo about my disapproval. I had no idea what his appeal was. What was his magnetic power over all these girls – and guys? What exactly did they see in him? Even at his youthful age, it was obvious to me that Leo had no discernable skills of any kind – other than his apparent sexual prowess. Not to be judgmental, he never came across to me as being very smart. It was not like he had six-pack abs or a killer smile. And he never cleaned up his place. It was always a total pigpen. But none of that seemed to matter in his relentless pursuit of sexual partners.

Then one day, a few years into our friendship, I introduced Leo to a new friend – Alexander. I thought they might hit it off as buddies. When I first saw them interact, I noticed that they just stared at each other, completely speechless, almost like they knew each other from somewhere but couldn’t place it. Then Leo whistled at Alexander. I have no idea why. But I could tell that they seemed to connect in some odd, almost intimate way.

As time went on, Alexander and Leo hung out together every day. They were almost inseparable. I never could quite figure out the nature of their friendship. Leo never talked about it – at least not with me. But it became clear that he had feelings for Alexander.

Then one day, I stopped by to find Leo and Alexander lying together – with a baby. And not just any baby. It turned out to be Leo’s baby! That’s when, to my shock, I discovered that Alexander was in fact Alexandra – a girl!  But she had never once corrected me when I called her Alexander. I had no idea. Leo was way too young to be a dad, I thought.

I am not one to judge, so I tried to be happy for Leo and Alexander, er, I mean Alexandra. But I wondered quietly, how long would it be before Leo abandoned Alexandra and their offspring? I was 18 when this happened. And it was time for me to head off to college.

I remember the day I finally said goodbye to Leo. I was at a loss for words. He couldn’t speak either. As I headed out the door, Leo just looked back at me, silently, with those impenetrable dark eyes. He too must have been sad because he couldn’t even muster up a smile. He just whistled and turned away. Then he started eating a carrot, something he always liked to do. Because Leo loved carrots, just like any other guinea pig.

PS: This is a true story. Leonardo was my guinea pig. I got him for my birthday in seventh grade. He routinely had sex with any guinea pig placed in the same cage with him, including Alexander, who I purchased (thinking it was a male) at the pet store to keep Leonardo company.