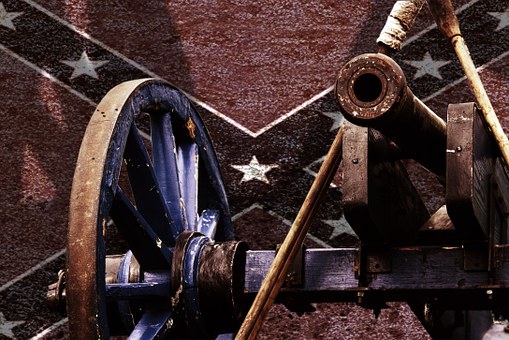 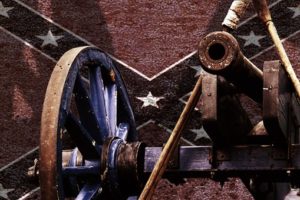 Revisionist History At Its Best!

Since many individuals in our modern world- for instance Texas school book editors, far right extremists, far left myopics, Polish and Japanese World War II non-apologists, nationalistic Presidents, OUR President, etc.- seem to be OK with changing the way things really happened in history, then, dad gum it!, it is perfectly right for me to do the same!

After the first horrific battles of what became known as the “War Between The States” and was later dubbed The Civil War in the 1860’s, many on both sides realized that there was going to be no easy end to it. This fight over slavery, but also over states rights and the concentration of different levels of power within the no longer United States of America looked like it was going to go on a long while. Many saw no way out from the bloodshed, the hatred and the unrest but to flee the badly battered country. Instead of staying and fighting and not wanting to face their own domestic problems, they chose to share those problems with their neighbors.

Mass exoduses of people, mostly poor as they were the first ones to be chosen to actually fight the battles, began. Droves of them left behind their homes both North and South and headed to the other, more peaceful and promising lands of Mexico and Canada to find their prosperity in a world of less conflict and danger. Not to mention that bothhome countries possessed abundant land and resources that were not yet fully exploited.

As can probably already be surmised by the reader, the southerners who chose not to be rebels headed down to the land of Quetzalcoatl nearest them which held the warmth and tendency towards agriculture that they were used to. The Yankees, like their idol Henry Thoreau, found the war to be distasteful and unfair but did not want to spend their time in jail as he did, headed north to the frigid, more puritanical lands environments that had appealed to their heritage.

Both countries were caught by surprise at the masses of Americans seeking refuge in their homelands, at first mostly men, then as restrictions eased their women and children came too as anchor babies to firm their hold on the new lands. In the beginning Canada and Mexico felt they must be accommodating and were willing also to take advantage of the cheap labor they provided. They granted them asylum and even citizenship which the new-lings eagerly grabbed up. For a while all four sides were content with the situation.

Time, however, will usually expose cracks in even the most placid of illusions. The Americans both northerners and southerners tended to stay in clans and not mix widely with their patient new caretakers. These newcomers were often rude and boorish and wanted not to adjust or adopt the ways of their benefactors. Although living in their neighbors lands they still felt that they were above their new countries laws and that the the America they had forfeited was still the greatest the world had to provide and superior to that of their present landlords. The Ami’s brought their bad habits with them as well- the alcohol, the mistreatment of natives, the refusal to learn any other language than English and the belief that the environment existed only to be rendered into material things of questionable real value.

These invaders, as they soon began to be seen as, disrespected women, treated animals harshly or over hunted them for game and sport, considered children often to be chattel for the factories and fields and had an endless lust for material things. They especially liked guns, which took a toll on the new lands quiet, their animals, their trees, their signage and eventually on their citizens themselves. The Mexicans especially did not appreciate the newcomers refusal to learn Spanish and to be constantly looking down their noses at them.

To add further stress, the Americans started claiming the total rights that the citizens of their host countries had, including welfare, voting rights, social security and hospitalization. They believed they had the right to everything the Canadians and Mexicans had garnered for themselves over the generations- choice land, nice homes, good jobs, pensions. The Americans had a dream of having the same, but immediately. They called themselves ‘Creamers’ in that they wanted the cream of the crop too. But they wanted it now, not a generation or two away.

That was when in both countries political parties and groups formed that hated the intruders and wanted them ousted. They burned American flags and boycotted American cotton, alcohol, books, inventions, corn, and rutabagas. The Americans, in turn made fun of their maple syrup, tortillas, Mounties, sombreros, hockey, serapes, maple leafs, and Mariachi bands (although the last item was justified and still is today). Tensions rose until far right groups formed that wanted the new people ousted by any means possible. Disgruntled citizens in both Canada and Mexico voted in new Presidents who based their campaigns on anti-foreigner sentiment. They in turn became the last new Presidents for decades as once voted in they simply abolished voting altogether as too dangerous for the country as the American foreigners were quickly out-populating the originally inhabitants.

In Canada the Americans were finally forced to either flee back to the US and its strife or were pushed into the far north where they had to fend for themselves in the tundra without crops or anything to build houses from but snow. The Mexicans loaded the gringos into intentionally leaky boats in whatever ocean was conveniently the closest and pushed them out to sea. In both cases the problem was solved.

Both countries then built walls along their borders to keep the barbarians within their own homelands to sort things out amongst themselves. Both the Kanucks and the Mexes then settled back into peaceful existences. Eventually it got real quiet on the other side of the walls……..