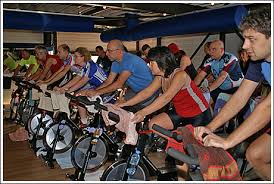 BOSTON.  It’s 5:55 a.m., and Julie Berman’s alarm clock just went off.  She’s not quite ready to get up, but she doesn’t hit the snooze button.  “I’ve got to start speed-dialing at 5:59 if I want to make the list for Sister Joe’s class,” she says as she hunches over her phone to call in her reservation for a 12:15 spinning class at her health club.

“She may be brutal, but she is cruel.”

“Sister Joe” is Sister Mary Joseph Arimathea of the Sisters of the Precious Blood, a religious order whose mission in life is to teach grades K through 12 and, more recently, to keep America’s young professionals trim and fit.  “Whenever I see a set of flabby abs,” the nun says with a look of barely-concealed disgust, “I know why the Big Guy Upstairs put me on earth.” 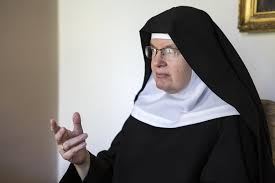 Sister Mary Joseph Arimathea:  “Two-minute climb, then one minute in the saddle.”

As a result of years of punishment she handed out to smart-alecks such as Scott Walje and Dickie Racunas, two fifth-graders who chose “Aloysius” as their confirmation name just to tick her off, Sister Joe is regularly ranked among the top spinning instructors in the Boston area by local magazines and weekly newspapers.  “She makes you work,” says Berman, “and she doesn’t want to hear any excuses about your white wine hangover.” 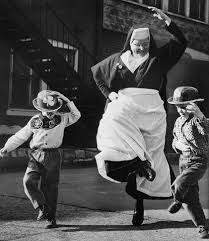 Remember to stretch before class:  “I’m going to make your muscles burn like you’re suffering in Purgatory.”

That apparently curious confluence of religious discipline and aerobic exercise is being replicated across the country, as more and more nuns are entering the crowded field of spinning instruction and excelling at it.  “Many of the early spinning instructors were former sadistic prison guards,” says Boston Fitness Club manager Mark Salerno.  “We tried non-sadistic guards, but our members complained that they didn’t get a good workout.” 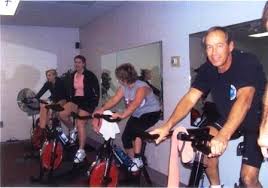 Spinning is a form of aerobic exercise developed in 1989 by cyclist Johnny Goldberg of Santa Monica, California, in order to train for races.  Skinny instructors shout at pudgy professional participants who ride stationary bicycles to bad rock music, helping them to tone and firm muscles and lose their hearing.

“You can’t all go to the bathroom at once!”

Sister Joe’s class is a model of decorum, as were the catechism classes she taught before being transferred to Boston to minister to yuppies making the transition from post-adolescence to early middle age.  “Shake what the Good Lord gave you, girl,” she shouts at one young woman who is slacking off in the back row, hoping to avoid the nun’s steely gaze.  “If you think you’re suffering now,” the nun adds, “wait until you burn in hell for sleeping with your roommate’s boyfriend.”