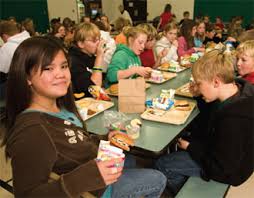 Me and my buddy Rocco was crusin’ the streets on the lookout for perps, when all of a sudden his stomach starts growlin’ like a bastard.

“This is a tough beat,” he said, staring out the window into the middle distance, a blank expression on his face.  You get that way after a coupla years on the lunch money deadbeat beat.  “I got to ride around all day, thinkin’ about tater tots . . . and chocolate pudding . . . and peanut butter cookies.”

“Don’t I know it,” I said.  “I’ve got two, maybe three years left–that’s all I can take.  Then I want a desk job, somethin’ nice and easy, on the glide path to retirement.”

“Yeah,” Rocco said, brightening a little.  “A cabin up on Lake Winnipesaukee, a little boat there–that’s what I want.” 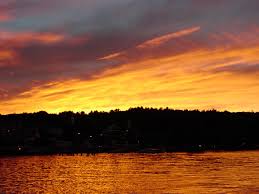 I tell ya, the burnout among my fellow officers is takin’ its toll.  Rocco is the third partner I’ve had in three years.  The other two are gone now, one demoted to parking enforcement, the other–my buddy Jimbo–out of law enforcement entirely, unless you consider bein’ a mall cop a police job. 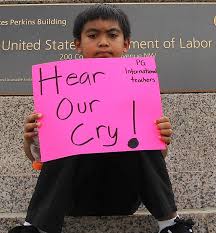 Jimbo broke the first rule of lunch money enforcement; do not give the scofflaws home court advantage.  You want to catch them off their property, in some fancy shopping mall or sumpin’, then ease up to ‘em, introduce yourself, say there’s a little matter of $23.67 due to the public school lunch fund–you wouldn’t want to bust our town’s AAA+ bond rating now, would you?  They usually fold like a cheap card table–it’s too embarrassin’, with some snooty clerk displayin’ a diamond tennis bracelet before ‘em.

But no–Jimbo had to go all commando.  He scaled an iron gate with security cameras and this venture capitalist’s wife had her private security force on him before you could say “tuna noodle casserole.”  Let me tell ya, from the beatin’ he got, he looked like leftover American chop suey when they got through with him. 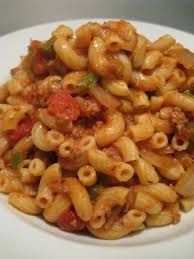 American chop suey: It was this bad.

Today, we’re after the mother of little Timmy Salmon, a twelve-year-old who’s been grabbing Jello brand parfaits and butterscotch pudding off the shelves like they’re going out of style, which they are.  You never see them on the menu of the nicer diners anymore–too bad, ’cause some of these kids are lookin’ like junior sumo wrestlers with all the transfats in the ice cream sandwiches.

We’re cruisin’ in our car, a 2013 Plymouth Neon Bulletin that sticks out like a sore thumb among all the Range Rovers and Escalades on the streets, but hey–the American people get the unmarked cars they deserve.  We spot our prey–a frost-job blond in Capri pants and a load of chains around her neck that looks like a Mister T starter set.

She’s trying to back into a parking space outside the Kate Spade Shop at The Stores at the Malle of the Metrowest–no wonder the prices are so high here with all them definite articles they got to keep up.

We wait until she’s got her Lexus stuck on the diagonal–too far out to corner in–and I whip our vehicle across her front fender and block her getaway.

“What are you doing?” she screams at me through perfectly-aligned teeth made straight by thousands of dollars of orthodonture in her well-spent youth.

Da Rock stakes a position out in the street to wave cars around the scene of the crime.  We don’t go for the police tape first thing–only if there’s resistance, and the threat of violent scratching by nicely-manicured fingernails.

I take out my citation book and scan down the list of unpaid charges.

“What’s this all about?” the woman snaps.  She’s a thin-lipped hoyden with a potential for violence nurtured on the field hockey fields of da local high school is my guess.

“This is all about $32.13 in outstanding charges run up by your son Timmy there,” I say.  “We accept VISA, MasterCard and–of course–cash.”  I give her the smarmiest smile I can muster.  She’s a little bony for my tastes, but I could see in da back of my mind getting it on with her–in a sort of handcuffs and police baton role-playing session.

“That’s impossible,” she says.  “I load up his swipe card every week with $25.  If he ate that much for lunch he’d be twice his size.”

“I’m not sayin’ yer right, and I’m not sayin’ yer wrong, lady,” I says to her.  “I’m just saying that’s what he’s got on da books of da school.  You wouldn’t want us to have to fire that nice young music teacher we just hired–all because a little Timmy’s sweet tooth, now would you?”

This gives her pause, so she pauses.  She’d never be able to walk into a PTO meeting again if she screwed up the enrichment that her neighbors pay through the nose for in property taxes.

“Well, it doesn’t sound right, and I’m an MBA!” she says–as if that’s gonna make a difference to me.

“I’m wonderin,’” I says.  “Your little Timmy–has he got a girlfriend?”

“I don’t think so,” she says.  This is called “community policin’” in Boston–gettin’ to know people in their neighborhoods, tryin’ to understand their situation before you haul ‘em in and some goo-goo liberal judge releases ‘em without bail to run up big lunch bills again.

“‘Cause a lotta da time, we find young boys blowin’ through their lunch money ’cause they got a main squeeze–ya know what I’m sayin’?”

“That would be news to me,” she says, still skeptical, but at least willin’ to hear me out now that I’ve shared with her da fruits of many years of experience trackin’ down free-spending young men.

All of a sudden her eyes get as big as the stones in her David Yurman ring as she looks over my shoulder.  “Timmy!” she exclaims, and I turn to look.

Who should we see but the little man himself, squiring not one but two girlfriends down the street, like he’s Iceberg Slim or somethin’.

“Hi Mom!” Timmy squeals, obviously proud of his prowess with the ladies.  “This is Courtney,” he says, very graciously, “and this is Christina.”

Timmy’s mom gives him a look of disapproval.  “Young man–it’s not nice to have two girlfriends at once.”

Timmy looks from one girl to the other, and the expression on his face makes clear he doesn’t want to give up either one.  “Are you sure?” he asks after a moment’s reflection.

Timmy’s face clouds over.  “I guess that means Daddy’s in trouble.”

Available in Kindle format on amazon.com as part of the collection “Busted: The Lighter Side of Crime and Punishment.”