Skip to content
Recent Humor
I think you’ll find I’m the most entitled person I know…
At the Federal Reserve Bouncy Castle
The one where they teach you how to use the computer…
Peeling Navel Oranges with Your Hands
Ten Habits of Highly-Organized People, and How to Avoid Them

Around Thanksgiving my thoughts turn towards those less fortunate than myself. This year, I’ve decided to extend a hand to Giacomo Leopardi, known to his few friends as “Jock.” 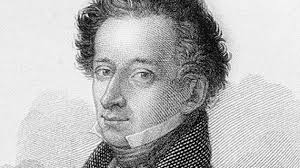 For centuries, Leopardi has been known as the world’s grumpiest poet. When Matthew Arnold published his collected poems in 1853 he intentionally omitted “Empedocles on Etna,” which is now recognized as one of his top ten poems in both the AP and Coaches Polls.  Why? “It’s depressing,” Arnold told a reporter from Victorian Poetry Daily. “I don’t want people thinking I’ve been hanging out in Leopardi’s basement, listening to Neil Young records.” 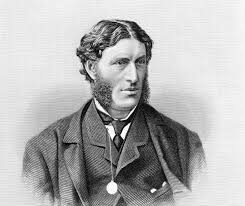 I’m in Missouri for the holidays, so it’s but a short drive from the small town where I grew up to Kansas City, where Hallmark Cards is one of the largest employers.  I figure if Leopardi can get a job writing poetry for them and is forced to be cheerful from 9 to 5, maybe he’ll snap out of it. 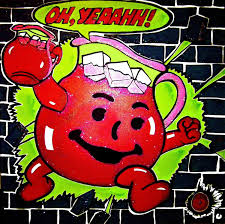 Mr. Kool Aid: Maybe this will cheer him up.

I honk the horn outside his house and he comes bounding out as this trip represents the most excitement he’s had in months. He hated Recanti, the small town where he grew up, and I now understand that bringing him to the Gateway to the Ozarks as an American Field Service foreign exchange student probably wasn’t such a great idea.

“I feel only noia,” he says, referring to the sense of ennui, dreary indifference, torpor, that suffuses his work.

“Here–I brought you something,” I say, and hand him a t-shirt with a bright red Mr. Kool-Aid on it.

“Thanks,” he says with a voice devoid of emotion. “Let’s get going.”

We hit I-70 and make pretty good time as the traffic is light. As I had hoped, the tedium of the drive moves Leopardi to break out of his customary silence.

“Where are you taking me again–and why?” he asks, staring straight ahead.

“We’re going to Hallmark, makers of more greeting cards than any other company in America,” I say, hoping that the possibility of being on the winning team will inspire him a bit.

“What good does it do to greet people,” he says morosely. “Existence is an imperfection, an irregularity, a monstrosity.”

I figure maybe his blood sugar is low and he needs something to eat, so I pull into a Dairy Queen. “What do you want, a Dilly Bar, a root beer float?” I ask as I get out of the car.

“I want a Cappuccino Heath Bar Blizzard,” he says, brightening a bit. “I’ll go with you,” he adds as he opens his door. “Otherwise you’ll screw up the order.” 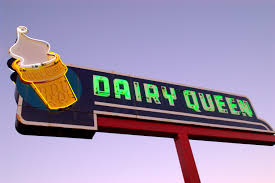 We order and for once I remember to get enough napkins, then we’re back on the road.

“Did you bring any samples of your work, like I told you to?” I ask, fearing that he’ll be unprepared for what may be his one shot, his one opportunity–to quote the great American folk poet Eminem–at leading a productive life. 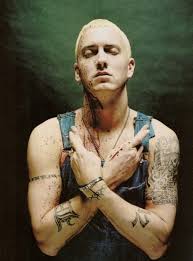 Eminem: So poetic, he has to write the stuff on his arms.

“Yes,” he says as he pulls his giant daybook–the Zibaldone di pensieri–out of his PBS tote bag. “Here’s something I wrote to my sister Paolina on the occasion of her wedding.” He clears his throat of the milky DQ sundae-drink, then begins:

The children that you’ll have
will either be cowards or unhappy.
Let them be unhappy.

“O-kay,” I say hesitantly. “Well, uh, that might work for one of Hallmark’s ‘Shoebox’ cards.”

“It’s their line of humorous cards,” I say. “Innovative, unpredictable, laugh-out-loud cards featuring a range of humor to serve a variety of relationships,” I continue, reciting the text from Hallmark’s website by memory, I know it so well.

The sugar in the Blizzard has apparently burned off. I should have ordered him a chili dog first.

“Here’s a maternity card I’ve been working on,” he says:

The day we’re born is cause for mourning.

“Well, that might work for a combined birth-condolence card,” I say, trying to stay positive. I realize I can’t take him in for his interview quite yet, so I call and reschedule for later in the afternoon while I try to think of some way to cheer up this stick-in-the-mud of a wet blanket.

We cruise around for awhile, when finally it dawns on me; there’s only one thing absolutely, positively guaranteed to put someone in a satisfied state of mind in this part of the country.

“I’m hungry,” I say as we pull into Arthur Bryant’s. “You up for some barbecue?”

2 thoughts on “Greeting Cards From the World’s Grumpiest Poet”