Skip to content
Recent Humor
Ripping the Headlines Today, 10/16/21
World-Class Worry-Warts Gather for Carefulympics
It pays to stick with the expert assembly…
The Night of the Red Sox Living Dead
Bic Jagger…

SKOKIE, Illinois.  Madeline Grebs is a long-time records manager at Modern Moosehead Indemnity, an insurance company in this suburb of Chicago, but she’s not the quiet, retiring type.  “Don’t call me a file clerk” she says to this reporter, and it is plain that she takes pride in her work.  “There aren’t many things in life that are worse than a lost file,” she says.  “Maybe losing your arm because you stuck it out your car window and got sideswiped, but even that’s not so bad if you already had a prosthetic device.”

But Madeline despairs for the future of her profession, which attracts many young applicants just out of college only to lose them in a few years when they move on to other jobs or go back to graduate school.  “I don’t know what it is,” she says.  “America’s best and brightest are going into dicey professions like law and medicine.”

Madeline Grebs, in her prime

Madeline’s concern is shared by others in the records management business, who formed a consortium in 2013 to address the “greying” of America’s file clerks and attract and retain young blood.  “Being a file clerk isn’t all about stuffing papers into manila folders, then putting them on metal shelves,” says Lionel Dotson, a freight railroad records supervisor.  “There’s also putting colorful labels on tabs.”

What the group came up with was “File-a-Palooza,” a festival of rock music to entice young people to view their specialty as hip, even “edgy.”  “We lose too many young people for all the wrong reasons, like money and professional excitement,” says Jim Salley, who designs records management systems for dentists.  “I ask these kids ‘What’s so bad about a job that makes you fall asleep at your desk?  That’s a good thing!’” 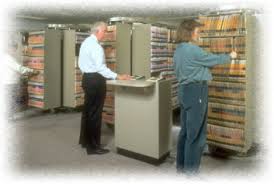 The festival, which will run for three days this week, advertises that it will feature slightly-past-their-prime bands such as Plain White T’s and Fall Out Boy.  A few early arrivals check in at the reception area of the National Association of Records Managers, and are directed down a long hall to a windowless office lined with banks of movable files.

“Are we in the right place?” asks a 22-year-old named Angela, who looks around for the bands and the crowds.  “Sure, you’re just a little early,” says Earl Masciarini, who has been maintaining the trade group’s own files since the late 1970′s.  “Let me just turn on my radio back here and we’ll see what kinda reception we get.”