MEDFORD, Mass.  It was, football experts agree, a mental error on a par with failing to spike the ball with no time outs left.  “Football isn’t just blocking and tackling,” says East Central Kansas Junior College coach Bill Lambert.  “You’ve got to have your head on straight, with lots of stuff in it.”

“Did Demario wash his socks?”

So the New England Patriots yesterday released long-time fan Tony Demario of Medford, Mass., after the bridge toll collector neglected to stop his wife from washing his lucky socks before last week’s AFC Wild-Card Game, which the team lost to the Buffalo Bills.  “We want to thank Tony for his contributions to the team over the years,” said head coach Bill Belichick at a hastily-called press conference, “but we’ve decided to go in another direction.”

“It wasn’t me who put them in the washer, but it’s my responsibility to stop her and I didn’t,” Demario said as he brushed past reporters assembled outside Anthony P. Loconte Skating Rink in this near-suburb north of Boston, where he looked through a lost and found bin in the hopes of finding an equally-dirty pair of socks to wear for the upcoming NFL draft that begins April 28th.  “I take the blame.”

Demario had worn the socks since August 8, 2019, the date of the Patriots’ first exhibition game against the Detroit Lions.  “You never want to change socks until the clock at the Super Bowl says 00:00,” noted Superstition Editor Mark Klimrite of profootballnut.com.  “There’s a public health and safety exception for underpants, but all you get from old socks is maybe a little light fungus between the toes.” 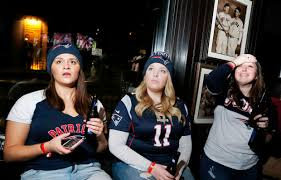 “Why couldn’t he just change his undershirt?”

Dimario will be banned from sports bars in Suffolk County, where Boston is located, during the 2022-23 Patriots season.  He will be eligible for reinstatement if former Patriots tight end Rob Gronkowski sees his shadow on Groundhog Day and returns to the team.