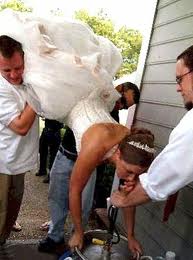 A newlywed couple in central Pennsylvania was arrested for shoplifting more than $1,000 worth of “finger food” from a Wegman’s Supermarket. Apparently, the food was for their wedding reception. Hell, I am not judging these people because I know the economy is tough, and not everyone is lucky enough to afford a Kardashian-style event. Sometimes people shoplift because they have absolutely no other option but to starve. It’s usually acts of desperation like this that leaves people needing someone like the philadelphia criminal lawyers after getting themselves arrested. I’m not saying what this couple did was right because if they could afford every other part of their wedding then they shouldn’t shoplift; but at the same time, they wanted to give the impression they were as wealthy as the Kardashian’s so they saw that this was the reasonable thing to do!

Well, that is not true because it seems that everyone can afford a Kardashian-style event because rumor has it the Kardashian clan paid nothing for the wedding. Everything from the three Vera Wang wedding dresses, which retail for $20,000 a pop, to the designer cake, jewelry, flowers and other wedding sundries were donated. Yes, the Kardashians and guests got to enjoy top-notch stuff, and in return the people who provided that top-notch stuff received national media attention and free advertising. As it turns out, the Kardashian wedding wasn’t even a break-even proposition. Some news sources say the family netted close to $17 million on the affair.

Okay, back to our bride and groom who stole the $1,000 worth of reception food. Unlike the Kardashians and their 440 guests, who ate caviar with an estimated value of $750,000 and a meal prepared by Wolfgang Puck, our Pennsylvania couple chose ribs, frozen mozzarella sticks, wings and other finger food to fill the empty stomachs of their guests. Not a fancy feast to be sure, but throw in their kegs of “Natty” Light, and it would have indeed been a tasty smorgasbord if only the couple and the food didn’t wind up in jail.

To make matters worse, it seems that the shoplifting love birds also had in their possession at the time of their arrest, some drug paraphernalia. I would like to give them the benefit of the doubt and say that the alleged paraphernalia was part of their wedding favors. I know that having some stuff for their guests to smoke or snort doesn’t hold a candle to the Kardashian favors which included a notepad with the couple’s picture on it, a candle wrapped in a KK-embroidered box, and heart-shaped Krispy Kreme donuts among other treats, but the paraphernalia probably would have helped give that central Pennsylvania wedding a classy lift. Hey, it couldn’t have hurt.

Okay, for the record, I will admit that I am probably more of an appetizer wedding person myself. The hoopla and opulence of the Kardashian wedding was lost on me although I still believe that it is her money or at least the money of those who handed it over to her, to spend as she wishes.

What struck me about the Pennsylvania couple is that they are not some 16-year-olds one would see on that Teen Mom show. No, she is 22, which to me is still too young to walk down the aisle, and he is 32. Yes, 32. One would think he has worked a bit and should be able to afford the frozen cheese sticks and chicken wings. If neither of them can afford this feast, why are they getting hitched? If there is any case for a couple living together first to find out if either of them can stand the other person before tying the knot, it is this couple. I can’t believe that at least one of them won’t wake up one morning in the not-too-distant future and realize that a mistake has been made.

If I had to guess who would be the first person to recognize a marital boo boo, my guess is the 22-year-old girl. I would think there is a mother, sister, friend or father with a shot gun who has tried to tell her that a 32-year-old who needs to shoplift the wedding dinner is not a guy that holds too much promise of staying out of prison for very long.

So, this tale of two weddings got me thinking. What if the designers and all the fancy vendors started to fund everyday people weddings? Okay, I would say this Pennsylvania couple is not in contention because I think criminal activities– even if they are just little felonies, should disqualify a couple from wedding help. But also the couples who receive the free wedding stuff should not have to have a sad story. They don’t have to prove that they were ill or in a horrific accident or kidnapped or impregnated by aliens. They just have to be nice people, who after extensive psychological testing, look like they might actually stay together for more than a year.

So, I challenge all those designers, chefs, artists and jewelers who love to fawn over celebrities to start fawning over the little guy and girl. Maybe, just maybe, they can prevent another central Pennsylvania couple from spending their honeymoon night in county jail.

7 thoughts on “A Tale of Two Weddings”