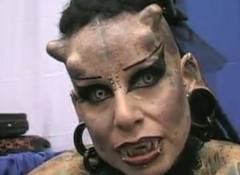 A friend of mine decided she was going to quit smoking and lose weight all at the same time.  I thought this was a bad idea especially since she is going through menopause as well. This is a dangerous combination which many experts call The Perfect Storm.

When a body attempts to rid itself of too many addictions and hormones at one time, a person can feel stress, frustration and friendless because no friend is going to stick around and take the punishment that the addicted, dieting, estrogen-deprived woman will inevitably dole out.  It’s nice to be there for someone you care about, but to be there for an emotionally-confused, nicotine-needing, sugar-craving maniac is nothing short of suicidal.

Okay, I was the suicidal fool.  She caught me at a weak moment: the moment I answered the phone without looking at caller ID. Her voice was sincere but needy, and I put aside my own fears and the warnings of other women friends and agreed to meet the poor distraught wretch.

Having never smoked, I didn’t get the nicotine withdrawal thing.  She asked me to go to dinner to take her mind off of her soon-to-be-conquered habits.  In my naïve mind, I thought she would slap on a nicotine patch and she would be her same old self.  Granted, her same old self was a bit short-tempered on most days, but these cigarette cravings gave her a harsh, belligerent persona – sort of what one would expect if, for example, Ann Coulter found herself locked in a room filled with liberal Democrats. The no sugar, no carbs, no alcohol diet my friend heaped on top of her no smoking goal, transformed her into the female version of the Wolfman on a full-moon night.

She howled and hissed at me from across the table; she howled and barked at the waitress, and I think I saw drool oozing from her mouth as she foraged through her Cobb salad in search of the bacon bits.  I looked away for a second, and when I looked back, I saw her holding her knife and eyeing my jugular.  I wasn’t sure if I should get up and go to the ladies room or head out the door and call a priest for an exorcism.

I opted for the ladies’ room.  I was literally shaking, but instead of seeking religious help, I called a mutual friend from the bathroom stall and asked her to come meet us.

“What the hell is the matter with you?  No freaking way. Drive home now!”

“I can’t. She drove.  Come on please?  Then you can drive me home. She is so scary. I think horns are growing on top of her head. She is making these creepy, guttural sounds; I think she is speaking in tongues.  Please?”

Finally, she took pity on me when I reminded her that I knew about her “special cigarette stash”, and she told me she would come and get me in about an hour.

“I have to pick up my son. You will make it an hour. She won’t do anything to you in the restaurant. Just don’t leave there with her. ”

I promised to stay put, but I could not believe her child took precedence over a satanic possession. I went back to my table and ordered a martini. I figured the alcohol would numb me enough that I wouldn’t feel the effects of a physical attack, and even if there was pain, it would act as an antiseptic for my wounds.  I took a deep breath and tried to relax knowing help was on the way.

At the end of dinner, my rescue was still nowhere to be seen.  I knew I didn’t want to leave with this madwoman who had scared several patrons into demanding they be seated at a table across the room. The brave waitress came over to hand us the check and then I got a wonderful, terrible idea.

“May I see the dessert menu?” I asked. I thought the waitress would drop dead right there.

“ok-k-kay,” she said and ran to the menu station.

“Nooooooo!” my friend bellowed in pain.  “NO! It will make me weak.”

“You need to have some chocolate – gooey chocolate. It’s good for you,” I tried to convince her.

The waitress brought us each a piece of extra dark, devil’s food cake. I thought it an appropriate choice.  After the first taste, I saw the red tint in my friend’s face begin to fade. By the third bite, the horns started to recede back into her head and by the time the last forkful entered her mouth, she wore a smile of sheer contentment.

‘Wow, suddenly I feel so much better!”  She cooed with delight.

My rescue ride came in the door and gave me a death stare because the woman sitting across from me was not the Satan I described but a nice, normal middle- aged woman enjoying a dinner out.

I pointed to the cake, and the rescuer nodded that she understood.

“Oh well,” my chocolate-filled but still nicotine-addicted friend said, “I guess I will start my diet another day. A little delay won’t matter.”

But that delay does matter. Before she has a chance to begin another day of total deprivation, I will be long gone and might accidentally leave my cell phone at home.  I have peeked into the soul of evil, and I never want to see that again.

12 thoughts on “The Devil Came to Pennsylvania”