There’s a simple reason why the economy keeps limping along – people have no spare money. The minimum wage is ridiculously low, big companies like Wal-Mart don’t give workers enough hours, and many well-paid federal and state jobs have disappeared. People lose one job and then get another that pays less.

So, millions of people at or near poverty only spend money on basics, causing a huge lack of demand that prevents hiring in the economy.

Here’s how a person in this situation is able to obtain something other than basic necessities: 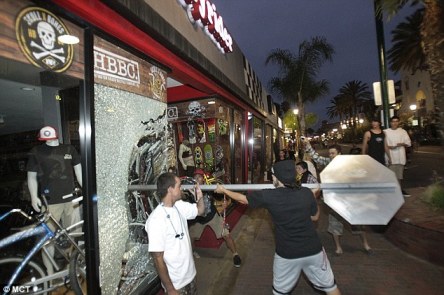 Unfortunately, the number of Stop signs is limited. And we can’t count on congress to fix this. Boosting the minimum wage would add tons of demand to the economy. A poll in July found that 80% of Americans favored raising the minimum wage to $10.10 – the House responded recently by passing an amendment that bars funding for ACORN, an anti-poverty group that doesn’t even exist.

But despair not. The other night I heard about a great work-around to the demand problem. A friend of mine told me a story about his first day at college:

Various banks had set up booths offering credit cards. At one, students who signed up for a card got a blue t-shirt. Later that day my friend found himself in a cheesy college bar. Two tables over were a group of guys wearing those blue t-shirts. The woman serving them wore an outfit that included a cowgirl hat, a hip-holster with little white pistols, and a bandolier (a bullet holder that drapes down from the shoulder across the chest). The bullets in the bandolier had been replaced with little shot glasses.

My friend said it was like watching The Alamo Of Alcohol. The blue shirted guys bit the dust hard, just like the Texans did in 1836. But in their defeat they put a huge dent in their new credit cards. Using those cards was true demand-enhancement, a type of Quantitative Cheesing unleashed upon a college town.

So if Congress refuses to do anything, maybe the banks can help. They could flood campuses nationwide with zero-interest, no-repayment-required cards. One semester of this would jump-start the economy.

After a massive bailout followed by zero convictions on Wall Street, it’s the least that banks could do to show some gratitude.

3 thoughts on “The New School Of Bandolier Economics”