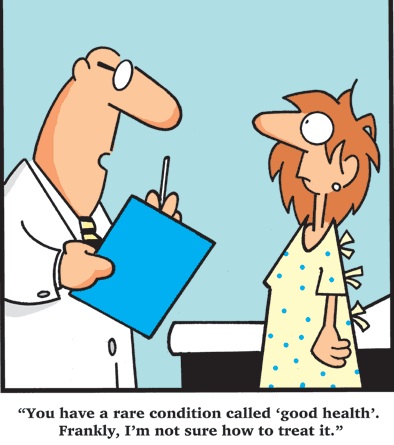 I can understand why people freaked out over the Affordable Care Act. Duped by a doomsaying media, some people thought what they saw on TV was actually about health-care itself, and not primarily an attempt to tarnish the President. So they lost it, picturing a future filled with grim surprises.

Like, you’d visit a new, unfamiliar doctor for a sonogram. And when that doctor saw you were carrying twins he’d say “Well, this changes things. It looks like your delivery date is now 18 months away.”

I recently found a new doctor. While sitting in his waiting room I paged through a magazine with an article about “The Top 50 Doctors In Seattle.” My doctor wasn’t among them. But the fact that he didn’t hide the magazine told me the guy was probably cool.

The nurse met with me first. She had me go into the bathroom and provide a urine sample. I completed my task, put the jar in the little cubby hole, and returned to the nurse. I smiled and said “Okay, I completed my stool sample, what’s next.” She didn’t send me packing, which made me feel even better about the place.

But ten minutes later, I got the ultimate test of a new doctor. Since I’m nearing 50 I needed to do that test. You know, the procedure that requires the doc to wear a latex glove and has the same number of letters as “red state”? The one guys put off until they’re 60? Yup, that one.

Well, sorry to disappoint, but it was quick and painless. My new doc was a pro. And he even laughed when I asked if I should get a second opinion.

All in all an enjoyable visit with a bunch of laughs. And thanks to the Affordable Care Act it didn’t cost me a cent. I like freebies when it comes to humor.