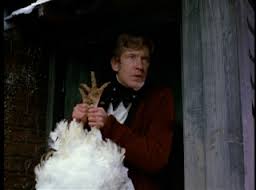 I watched my favorite holiday movie over the weekend, A Christmas Carol – the George C. Scott version.  After years of enjoying this classic, I admit that the movie presents for me one major—for lack of a better term—challenge. Before I share this challenge with you, allow me to preface it by saying I love Charles Dickens. If he were alive today, I would be a Charles Dickens’ groupie. I would be like the “Dead Heads” who follow the Grateful Dead.  I would be a…”Dick Head?”   Hm. I think there should be a better term.  Well, we can figure that one out later.  On to my Dickens Dilemma.

After the ghosts of Christmas past, present and Christmas yet-to-be showed Scrooge the error of his ways, he began to make amends for his miserly ways by surprising his beleaguered employee, Bob Cratchit, with the prize turkey that hung in the poulterer’s window. Scrooge ordered the bird on Christmas morning after 9 AM with the intention it be delivered to the Cratchit’s that day in time for their Christmas dinner.  The turkey, which resembled a Volkswagen with feathers and feet arrived at the Cratchit home sometime in the late morning, and the grateful Mrs. Cratchit declared that she would cook it and have the best Christmas feast ever! When did these people eat their Christmas feast? New Year’s Day?

This bird could not possibly be cooked in time for their afternoon holiday feast or even a late night holiday feast. I get that these were the days before anyone knew about Salmonella, so I am sure Mrs. Cratchit probably served a few portions of pink poultry to family and friends during her lifetime, but come on, the bird still had to be plucked. That in itself had to take an hour or so to ensure that no one coughed up a feather during the feast.

So, I’m going to take a huge leap here and assume that Charles Dickens never prepared any meal let alone a fresh-killed turkey meal.  Anyone, who has ever worried about their Christmas dinners, knows that it takes more than wishful thinking to create an edible holiday feast. Perhaps the spirit of Christmas yet-to-be should have offered some extra magic to Mrs. Cratchit by presenting her with a microwave or one of those cool induction ovens that I see on Sunday morning infomercials that cook food in half the time or maybe a turkey fryer. But did he? Nope.

Personally, I think if Scrooge did have an epiphany about Christmas and discovered its true meaning, he would have wanted Mrs. Cratchit to enjoy the holiday and not have to cook anything. He would have wanted her to sit back and relax all day long instead of spending hours picking apart a piece of poultry. While this was not part of the official Dickens tale, it is said that the following Christmas, Mrs. Cratchit sent a note to Mr. Scrooge which read, “Eb,  thanks for the prized turkey, but this year, a gift card to a nice restaurant or a even a bucket of Kentucky Fried Chicken would be more appreciated. Bah, humbug, Mrs. C.”