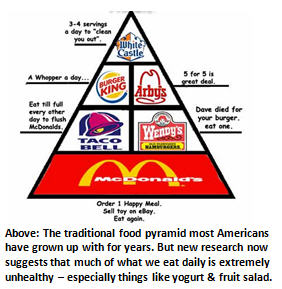 It seems every week there is a new study about yet another popular food staple that has been linked to cancer or heart disease. It’s all very confusing. First experts tell you that grape juice is a heart-healthy beverage. Then other experts claim that it’s bad for you (containing as much sugar as soft drinks).

As one of the nation’s leading nutrition experts, I have compiled a comprehensive list of unhealthy foods. Avoid these foods and you should be able to lead a long and healthy life – assuming, of course, you don’t live in Afghanistan, Somalia or Detroit, in which case all bets are off.

Cake, cookies, candy and ice cream. When I first discovered that these foods were considered unhealthy, it came as quite a blow. For years I had considered these to be the four basic food groups. But apparently no longer. They are all high in sugar, carbohydrates and polyunsaturated fat. Avoid these at all costs – unless you prefer to be happy.

Red meat.  Are you kidding me? Deadly! All that saturated fat and cholesterol choking up your arteries will turn you into a ticking time bomb. Not to mention that most processed meat is riddled with sodium, which increases blood pressure. Avoid red meat completely. While we’re on the subject, avoid meat in any of the following colors as well: green, blue, fuchsia or plaid.

Milk, cheese and eggs. The trifecta of death. A recent study reported that eating whole eggs is as dangerous as smoking. That’s no yoke. The hormones in milk, even fat-free milk, have been linked to breast cancer. And don’t even get me started about the Charybdis of Cheese. Cheese consumption is closely linked to obesity and heart problems, as well as breast cancer, prostate cancer, diabetes, and osteoporosis. Ironically, the only known cheese that has not been shown to be hazardous to your health is Dangerous Cheese, a rock ‘n roll band from Saskatchewan, Canada. (They totally rock.)

Fish and seafood. Thought when you switched from eating red meat to fish you were out of danger, didn’t you? You were DEAD WRONG. According to recent research, “there is absolutely no safe fish on this planet anymore,” because almost all fish are contaminated with heavy metals like mercury. Well, how about seafood then? Are you insane? Do you want to die this instant? Seafood is even more deadly than fish. Critters like lobsters, oysters and crabs are the sea’s garbage disposals. They live off the excrement and waste on the ocean floor, making them (and I quote), “some of the most contaminated foods on this planet.”

Wheat. Do I have to explain this one to you? Wheat, or as I like to call it, the death sandwich, is one of the very worst foods you can consume, according to many studies – right up there with sugar. Wheat is the biggest source of gluten in most people’s diets. Gluten consumption can lead to obesity, a breakdown of the immune system, spikes in sugar levels, and damage to your intestinal lining. So go ahead, have another PB&J sandwich. I’ll go measure your coffin. 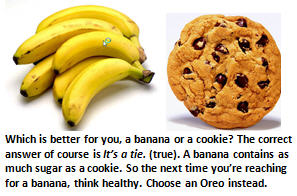 Fruits. An apple a day may keep the doctor away… but not the undertaker! Most fruit is saturated in sugars. You might as well stuff your pie hole with, well, pie. The list of health risks from eating too much fruit could fill my compost bin: dental decay, osteoporosis, chronic fatigue, skin problems, thinning hair, weakening nails, and excessive irritability (mainly from eating all that fruit when what you really want is a cheeseburger). In terms of sugar content, a banana is equivalent to a cookie and ranks dangerously high in its glycemic index score. I have no idea what that means. But if you’re a banana eater, be afraid. Your death countdown clock is ticking.

Vegetables. Well, technically I couldn’t find any research that indicated vegetables are bad for you; however I did find one study that cautioned against eating too much carrot cake. So I think it’s safe to conclude any vegetables eaten with cake or other flour-based products are deadly and should be avoided. I’m looking at you, zucchini bread.

Water. Surely, drinking filtered water can’t be a bad thing, can it? We see all those ads with people drinking water that came from some underground spring in the French Alps, right? Wrong. First of all, that French alpine water is actually from Cleveland. And second, yes, water can kill you. Drinking a glass or two a month probably won’t jeopardize your safety. But if you drink too much water, studies show it can result in an imbalance of the body’s electrolytes and lead to something called water intoxication, which can lead to severe vomiting, seizures, brain swelling and yes, even death. If you must drink water, mix it with Country Time lemonade powder, just to be safe. 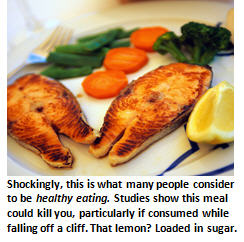 There are scores of other foods which may kill you simply by your making direct eye contact: any form of pasta, tomato sauce, peanuts, sunflower seeds, or anything that tastes even vaguely enjoyable. The bottom line: If you want to lead a long, healthy and excruciatingly boring life, your safest bet is to avoid anything resembling food – unless it’s plastic.

But there is one item that research has found is actually healthy: Beer. According to a study published in Men’s Health News, moderate daily beer drinking makes you “30% less likely than non-drinkers to suffer from cardiovascular events like strokes, heart attacks and heart disease.” My advice: Improve these health benefits by quadrupling your daily beer intake. Bottoms up.

In conclusion, my expert advice for living a long and healthy life is this: Avoid just about all foods but chug as much beer as you can hold down. And if you really feel a craving, okay, go ahead. Have some Brussels sprouts. I guess they won’t kill you.

3 thoughts on “IMPORTANT HEALTH SAFETY WARNING: THESE FOODS WILL KILL YOU!”