Skip to content
Recent Humor
Ripping the Headlines Today, 9/19/22
As Helicopter Kids Grow, Bring-Your-Parents-to-Work Spreads
Noah way, I thought I saw all the Batman films…
Me and Tennessee Williams at the 10-Minute Play Festival
Plant Based Pizza… 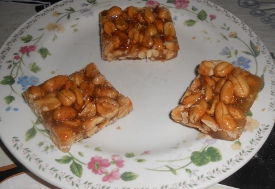 If the brittle shatters into irregular shapes, shrug and say to your guests, “Look at the nice peanut brittle I made for you.” If people fuss, shake your big, badass knife at them. You don’t need that negativity in your life. And after they’ve fled, there’s even more yummy peanut brittle for you.

1) Road construction was much simpler in early 19th-century Brazil. Workers poured sand where they wanted the road. The specialists took over from there and strew stones over the sand. Adults did not press the stones in the ground. Stones on the ground were beneath them. Literally, hee hee.

Ahem! So, kids, called were hired to walk up and down the road stomping stones into the sand. Kids everywhere, to this day, are excellent stompers. However, the stomping skills of Brazil’s kids during the early 1800s have never been rivaled. Brazil’s smooth roads were the envy of the entire world. Indeed, while people in America have the phrase, “As smooth as a baby’s bottom,” South Americans still say, “As smooth as a Brazilian road.”

2) These roads came to be called pé de moleque or kid’s feet. Similarly, hot dogs are named after the chihuahuas of 18th-century Mexico who tracked down banditos, while the word succotash derives from the not-so-good vacuum cleaners sold by Tash Appliances from 1923 to 1924.