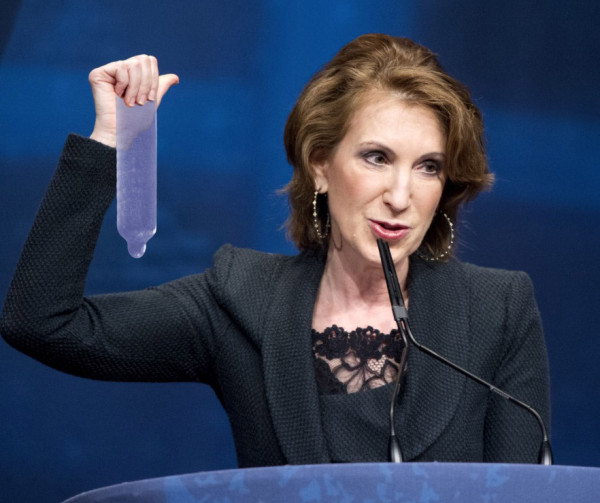 LINCOLN, NE — After making Planned Parenthood the centerpiece of her 2016 campaign, in spite of a multitude of reports that the videos used as the basis of her argument are erroneous, Republican presidential hopeful Carly Fiorina has now furthered her stance on pro-life by taking on condom companies, questioning the validity of their rubber.

At a campaign rally in Nebraska on Sunday, Fiorina criticized condom companies Trojan, Durex, Lifestyle, and many other unknown prophylactic off brands for deceiving the public into believing that rubber was safe to use as a barrier method of the prevention of unwanted sexually transmitted diseases and unexpected, unplanned pregnancies. A slideshow of freely distributed condoms at Planned Parenthood locations added fuel to the fire.

“Rubber belongs on our tires, not our sexual organs,” Fiorina said in front of a crowd of two thousand. “These companies are making millions and this is not even rubber! Planned Parenthood gives these out to our children to make them safe without thinking about the consequences,” she said as supporters cheered her on.

Fiorina ignored the facts that latex is in fact a rubber that has been proved as an effective barrier method against pregnancy and contracting known STI/STD’s. Instead, Fiorina regurgitated pro-life videos to support her argument latex is not rubber.

“As regards to this not being rubber, anyone who has watched this videotape — I dare Hillary Clinton, Barack Obama to watch these tapes,” Fiorina said. “Watch rubber fully formed at the Goodyear plant, then look at this scrawny translucent contraption. It’s plastic. Saran wrap. It tears and it’s laden with grease filled chemicals to make our children unable to conceive.”

The hodgepodge of industrial rubber manufacturing imagery mixed in with unboxing and unrolling a prophylactic caused quite a stir to the small town community. Fiorina boldly held it up to demonstrate comparisons between the two.

After Fiorina was questioned multiple times on whether or not she’s ever used a condom personally, she relented and firmly admitted to never have done so. After a thunderous applause and ovation, within minutes a pro-Fiorina super PAC released an online ad that again included the anti-rubber image, with the claim that “Carly Fiorina has never used a condom in her life because she knows what real rubber is when she sees it.”

Furthering the crowd momentum, the crux of her argument later went on to include female condoms as being devastating to a woman’s womb being under attack by contraptions, and that the larger issue is about the character of the nation being misrepresented around the world.

“They’re trying to keep us sick with a technicality about disease prevention,” Fiorina said after boldly parading the unrolled condom to the audience. “The character of this nation cannot be about false rubber for your body parts because of your insecurities about promiscuous people,” Fiorina said.

In a post rally meet and greet, she linked liberals’ support for allowing the free distribution of prophylactics without parental consent into civil rights regulations. “They are perfectly prepared to destroy the sexual organs and fertility in communities to promote propaganda about disease,” she said. “But they do not think that as a nation we need to keep our birth rates up to have productive workers, workers that they pander now to buy their fake products. This, ladies and gentlemen, is hypocrisy.”

Condom manufacturers don’t dispute that their products are 100% effective and should be used preferably with other means of contraception.

“Condoms are never 100% alone. We know that. Everyone knows that. But that bitch who’s been raw dog for years is an idiot and has no idea it’s not 1956,” said spokesman Nikki Jones, referring to CCAA, Condom Company Alliance Of America. “This isn’t about us — it is about giving her something to say to make her look intelligent. All she does is spread misinformation like a virus. She infected HP and now she’s trying to infect us. Her mouth needs a condom.”

Fiorina’s next stop on the campaign trail will be a pro-life protest at the Trojan manufacturing plant in Omaha Thursday afternoon.

7 thoughts on “Fiorina goes after condom companies; claims ‘This is not rubber’”