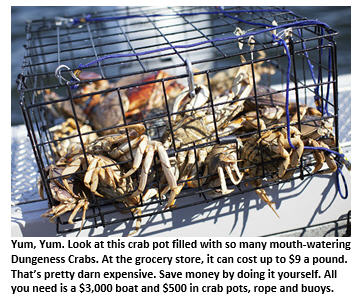 Not long ago, my wife and I moved to Camano Island, a tranquil, semi-rural community with lots of retirees. People here love four things: God, country, family and crabbing – but if they could only pick one, for sure it would have to be crabbing. People here are seriously into this activity. Just how serious? As you arrive on Camano Island, you’re greeted by a giant metal crab sculpture. The local newspaper is called The Crab Cracker. And if you confide in someone, “I’ve got crabs”, they won’t recoil in disgust. They’ll reply with, “Fantastic! Mind giving me some?”

Having lived here for two years, I’d never bothered to find out what all the fuss was about. But after relentless pressure from neighbors whose constant nagging included questioning my patriotism, in the end I caved. Last week I finally went crabbing.

Most “crabbers” own their own crab boat and equipment. To get started you need the following essentials: 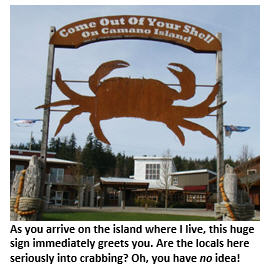 We had none of the above items, so my wife and I rented everything. I foolishly opted for the rowboat as it was half the cost of a motorboat. My crew consisted of my wife and her elderly parents. I bravely rowed two extremely uncooperative oars into the breezy, cold ocean waters ahead of us. After twenty minutes of laborious rowing into strong headwinds, my three crewmates congratulated me that we were already more than thirty feet from shore. As my arms began to cramp up, my wife graciously declined my chivalrous offer to let her enjoy the fun of rowing this “armored tank” of a boat for a while.

When we finally got out far enough to place the pots, I took great care to make sure that as I dropped the rope roughly 100 feet deep I did not let my leg get tangled into the rapidly descending line. I just wish I could say the same about my wife’s leg. Fortunately, I was able to catch her just in time before she was dragged overboard.

We were so excited when it came time to retrieve our pots, which were connected to red and white buoys – not unlike the other 75 identical red and white buoys floating in the same area.  It was an arduous test of my nautical skills to row up close enough to any one of these 75 red and white buoys, in the hopes that they were ours.  After rowing up to no more than 27 wrong buoys, I finally pulled up OUR two crab pots. 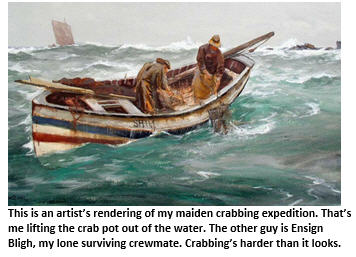 I’m pleased to report we captured 25 crustaceans. However, to my dismay, not a single crab obeyed my forceful command to exit the six-inch hatch and hop into the awaiting bucket. No, I was going to have to extract these hostile adversaries by hand.

In case you’ve never examined a Dungeness Crab up close, it has two large sharp front claws, which can do serious damage if you grab the crab from the front. I quickly determined – after only two very painful encounters of the clawing kind – that if I was going to emerge from this adventure still possessing the ability to type, I’d have to grab them from behind – or let my wife do it.

When we finally got back to shore – several hours before dawn – there was just one more task we needed to do: Kill our catch. That required slicing each crab down the middle of its back, then tearing off all ten claws and extracting its slimy intestines and internal organs. If this disgusting dismembering process sounds like fun, please stop reading. Seek professional counseling immediately. There is something seriously wrong with you. I asked my very liberated, self-confident, independent wife if she’d like to gut some of these writhing critters with me, but she quickly declined, arguing that this was a man’s job (right up there with getting rid of spiders, apparently). 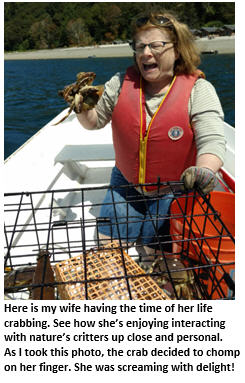 That was my maiden voyage into the world of crabbing that everyone else on this island seems to embrace fanatically every summer during the two-month crabbing season. Thinking back on my experience, I took away several valuable lessons. I learned that in the future I will never:

I think the most important lesson I learned from this adventure is that the next time I contemplate a crabbing expedition, I will select as my vessel the S.S. Shopping Cart. And I will bravely and sure-handedly navigate her through the choppiest of aisles until I reach the shores of the seafood counter of my local grocery store. Ahoy Matey!

2 thoughts on “How I Got Crabs”