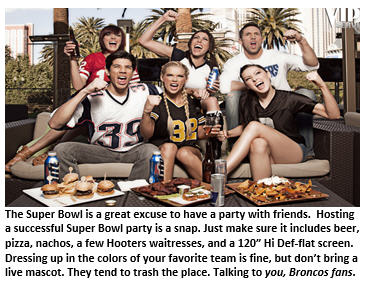 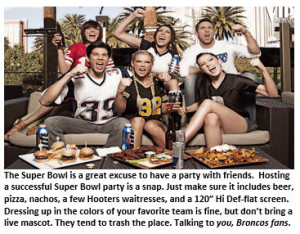 Sunday, February 7th is the biggest single day of the year in sports: No, I’m not talking about the Fresno Kennel Club Annual Dog Show taking place this coming Sunday – although granted, that is a very big sporting event. No, I’m talking about the Super Bowl between the Carolina Panthers and the Denver Broncos. I believe it’s Super Bowl MCLXXXXVIIIVX, but I could be off by a couple of V’s.

This week I am donning my wife’s BBQ apron to share my secrets to throwing a winning Super Bowl party. A Super Bowl party is a great opportunity for men to bond with their buddies over the world’s greatest spectator sport (after female mud wrestling). There are many friendship groups that gather to watch the playoffs, betting on them at sites like FanDuel and laughing at the guys who lost their bets. Then on Super Bowl Sunday the men will be chatting, fighting and laughing over the game. For the ladies it’s a great time to bond with other wives in the kitchen while checking on the status of our Meat Lovers’ pizza and replenishing our salsa dip – I noticed it’s getting a bit low, honey.

Fellows, when hosting a Super Bowl party, there are three parts to consider: preparations BEFOREHAND, what to do DURING the party, and finally, clean-up activities AFTER the party. Of course, most of you guys can skip Parts I and III, as those parts can easily be handled by your wife. Just put her in charge of the food and stay out of her way. She loves being in charge of something. 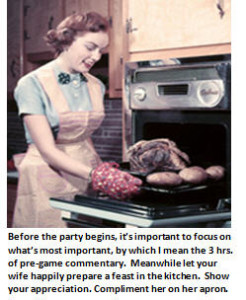 Part I: BEFORE THE PARTY

Make sure your wife has completed the grocery shopping well before kick-off. Her shopping list should consist of the following: Beer, chips, salsa, pizza, artichoke dip, beer, hot dogs, burgers, sliced cheese, beer, a roasted pig on a spit, beer, ice, bean dip, a giant piñata (preferably filled with bottles of beer), and diet Pepsi (for the ladies). Be sure not to forget the most important item of all: more beer.

Be thoughtful. I suggest buying a heartfelt gift for your special lady as a way of showing your gratitude for all her pre-party preparation. A set of attractive oven mitts would be a nice touch she would deeply appreciate.

When it comes to the beer, don’t sacrifice quality. The wrong beer can spell doom to any Super Bowl party, as your fair-weather friends make a raucous stampede out your door (with the roasted pig, beer piñata and the nachos) midway through the first quarter in search of someone else who actually knows how to throw a proper Super Bowl party. 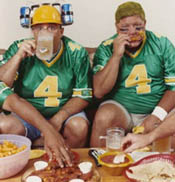 Part II: DURING THE PARTY

Guys, in some ways this is the easiest part, as all the cooking, food preparation and serving arrangements somehow seem to magically take care of themselves. Don’t meddle in the kitchen checking on the status of the burgers. That’s your wife’s job. Your job is to answer the door bell, make sure that your buddies are well stocked with beer and … well, now that I think of it, that pretty much covers your list of responsibilities.

To be a proper host of a Super Bowl party, you need to know the appropriate topics of conversation, as well as which topics are strictly out-of-bounds: 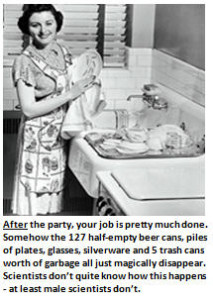 Part III: AFTER THE PARTY

Guys, this part should be relatively easy as well, because technically I’m fairly certain this is entirely the ladies’ responsibility, as established in the Official Rules of Super Bowl Parties in Sub-Section 37(d) of the NFL Code of Domestic Conduct, codified in 1954. But it is important to appear to offer to help your wife the clean-up. You don’t actually have to carry through with it, of course. Just make a sincere (sounding) gesture.

For your part, I suggest picking up 3 or 4 empty beer cans and offering to dispose of the dead yak one overly festive partygoer brought for the BBQ. But before you get too far, suddenly loudly remind yourself within earshot “Oh my goodness. I forgot about that important quarterly business presentation for the Executive Committee that’s due tomorrow morning.” And then apologetically slink upstairs to your office computer to log onto ESPN.com for the post-game analysis.

There you have it – the recipe for a winning Super Bowl Party. I hope I took some of the worry out of it for you fellows out there. Well, I must wrap this up. It looks like my lovely wife is having trouble carrying the four beer kegs in from the minivan for our party. She looks like she could use some husbandly words of encouragement about lifting with her legs, not her back.

Tim Jones is the author of YOU’RE GROUNDED FOR LIFE: Misguided Parenting Strategies That Sounded Good At The Time