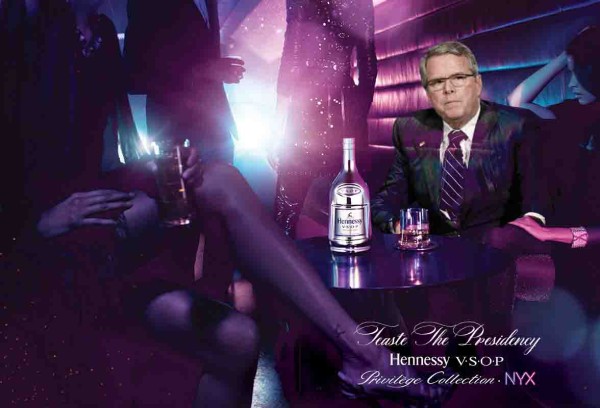 The unlikely partnership is not a first for Hennessy, a French based cognac house and the largest producer of cognac in the world. In 2009, Hennessy under the VS label released a limited edition cognac in honor of the presidential inauguration of Barack Obama.  However, Bush is is the first presidential nominee to have an alcohol endorsement.

“I am ecstatic about adding Hennessy to my campaign because I drink it regularly,” said the former Florida governor.

The controversy surrounding his choice of presidential supporters isn’t exactly news for a man hounded in scrutiny running for the country’s top office.  Since his announcement for running for president last June, Bush has struggled breaking free from public perception of his leadership based on his father and brother’s failed presidencies, and his own controversial stances on Stand Your Ground while elected governor of Florida.

However, Bush is enjoying an infamy not afforded to his peers.  The new ad campaign slogan “Taste The Presidency” has been generating a lot of sales for Hennessy from collectors eager to get a potential piece of presidential history. Currently, only Black and Prestige labels carry the promotion.

To Bush’s credit, his Hennessy lines have gotten endorsements from legendary rappers such as Snoop Dogg and Busta Rhymes, and have been featured in several music videos of Pharrell Williams.  In spite of its gangster rap endorsements, Bush’s campaign has made sure to remind everyone ‘to drink responsibility’. “Drinking is great, and you should take it for granted because one wrong shot could impede you from enjoying a very well-aged cognac.”

Both Hennessy and Bush has gotten criticism from the Mothers Against Drunk Driving organization, who have staged several protests across the country to force an end to the campaign. Public opinion has been that Bush is trading in virtue for celebrity in the event he doesn’t win the presidency.

In response to the criticism, Bush took to Twitter to address all the naysayers by responding “Nothing is worse than haters. Drink Cognac. Quit Hating.” — Jeb Bush (@JebBush) February 3, 2016

At a recent rally at Florida A&M University during a discussion to Black Student Union students on his pre-emptive plans to stop police harassment nationwide, free samples of cognac were given in Bush campaign gift bands as a token of appreciation for being invited to speak.

Bush’s campaign trail leaves him speaking to students at Fisk tomorrow afternoon, and then a four day schedule starting Monday at Spellman & Morehouse Colleges. A mixer hosted by Clark Atlanta University in conjunction with Hennessy, is scheduled for Friday.