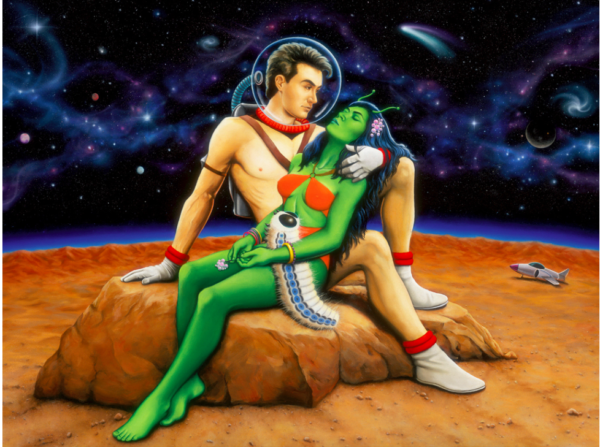 My wife, Carolyn, is the best wife in the universe. I say “in the universe” deliberately because, you see, Carolyn is not originally from this planet. Now I can’t vouch for the truth of the claim that women are from Venus and Bruno is from Mars, but I do believe I have amassed enough evidence to convince you regarding my spouse from space.

First, you should know that Carolyn is a twin, an identical twin (specifically a mirror twin so that when I see her reflection in a mirror, she looks more like her sister than like herself.) Yes, an identical twin. A clone maybe? Or perhaps on her home planet, babies always come in identical pairs.

The twin thing is provocative enough, but I didn’t really begin to see the light until Carolyn let slip a few telling remarks. One day (and often since then) she announced, “I love living on a planet with wind.” It’s true that this could partly be explained as an exercise in New Agey gratitude—but why not just say, “I love wind” or “I love the wind”? Her sleeping habits are even more suspicious. Carolyn untucks the sheets so that she can stick her feet out free of any covers. She says she cannot sleep if her feet are hot. (My feet, on the other hand, must be warm.) When she noticed the socks on my feet and the multiple blankets, she actually asked me—I’m not kidding about this—“How can you breathe?” Now, I understand that mouth-breathers are fairly common on this planet, but surely foot-breathers have to be extraterrestrials.

As far as eating, my cosmic companion usually remembers to conform to local customs, but there was one time that she, her twin, and I stopped at a McDonald’s for cheeseburgers. After we took our order to a table, I went back for ketchup. Roughly twenty seconds later, as I walked back toward the table, I was met halfway by the twins who somehow had fully consumed the cheeseburgers and were ready to leave. I can only guess at how they absorbed the caloric McFuel, but I’m quite sure no mastication was involved. I had to eat my burger the old-fashioned way—in the car.

My wife also has an inhuman sense of smell (as does her twin, of course). Once she told me she smelled a dead fish in the attic. I was delighted at the chance finally to prove her wrong, so I did a thorough search, of course found no fish, and gloated over her mistake—until two days later when I noticed a fish carcass on the roof of our house, apparently carried there from our recently flooded ditch by some bird of prey. Another time, in the car, her sister said, “I smell a grass fire,” and my wife said, “Yes, but with a little burning garbage mixed in.” About two miles down the road, we came to a large grass fire, in the midst of which a single barrel of garbage was also ablaze. My wife’s sense of smell is so unearthily keen that she has repeatedly insisted, “I can smell myself from far away.”

But what most convinces me about my wife’s off-planet origins is her psychic ability. She keeps track of noises and time in her sleep. She sometimes has the same dreams as her twin. She knows when our neighbor is about to call. She correctly “foretold” at a Halloween fortune-telling that one of our students was pregnant though the student vehemently denied it. She sees “ghosts.” And, most disturbingly, she frequently answers questions that I’m thinking but have not verbalized. So she clearly can read my mind, which is an awfully creepy place to have access to. Even so, God love her, she has stayed with me for twenty-six years so far.

I firmly believe in the claim that somewhere there’s a perfect somebody for everybody. In my case, the Supplier of Perfect Somebodies had to range a little farther afield than usual. Yes, my wife is light years beyond any earthling woman. She is truly stellar. Actually, make that “interstellar.”

8 thoughts on “My Wife Is an Alien”