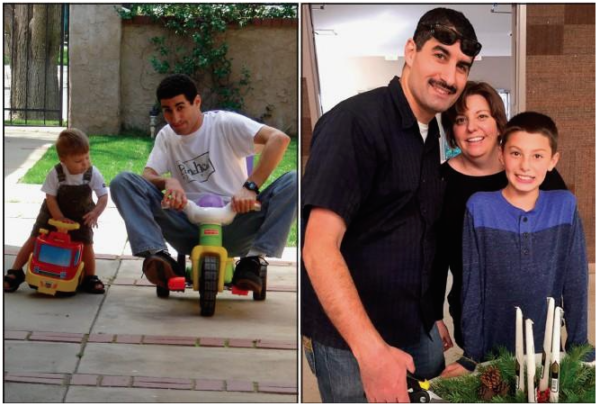 My son is coming home from college for Thanksgiving and I can’t wait. I miss him. In reality, he hasn’t gone anywhere—not yet, anyway.

The kid is only 13 years old. He’s in junior high school. But in just five years, my wife and I will be empty-nesters. I dread that. And I think about it constantly, which is dangerous for me.

There’s a difference between reminiscence and nostalgia. The former is fondly remembering what you’ve had, whereas the latter is thinking about what you’ve lost. So when I was taking my dog for a walk the other day and it occurred to me to head toward my son’s old elementary school, which I never do, I wondered if that’d be a bad idea.

I’m a fairly positive person. I have hope. I’d hoped that by walking by the school of my boy’s past I’d be transported to his younger years, which are now lost. The kid is 13! He’s more independent every day. He has a girlfriend. They’ve kissed! But he still forgets to brush his teeth every night. His mom and I have to remind him that if he likes kissing, he’d better realize that brushing is not optional.

My dog seemed to want to take the old path to the school. We used to go that way every day. We passed by the park where my wife and I used to push the kid on the swings, wait for him at the bottom of the slides and stand by the jungle gym awaiting his fall. Other parents and their toddlers were now enjoying all that fun, running and laughing.

My dog and I crossed spots where my son, in fifth grade, took pictures of trash on the trail. He turned those shots into an art project about litter in the world that won him a first-place prize. It’d only been three years since then. The Starbucks cup that was the centerpiece of his photo collage could’ve still been in those bushes. I couldn’t find it.

My dog and I passed the pool where my wife and I taught our son how to swim, and where we failed to teach him how to keep his mouth closed so he wouldn’t swallow the pool. Next to that was the house that was haunted on the kid’s first or second Halloween, and there was that tree where he spotted a lurking monster.

“Are you happy?” he asked the creature with the gaping mouth full of sharp, bloody teeth. My son was so worried the monster was mad. He was such a good-hearted kid.

And there it was: nostalgia. That sense of loss was suffocating. I really couldn’t breathe, like someone was standing on my chest. Some people call that panic or anxiety. I called it time to get home. I definitely couldn’t make that next turn where I’d run into the school.

There it was: the school. Right up front there—that’s where we lined up every year on the day before school to look over the class lists posted on the office windows to see who would be the kid’s teacher. Teachers didn’t matter to the kid. He just wanted to know if any of his friends were in his class.

Near the kindergarten building, I walked down the path where, one day, my son was running to class and fell. He was so excited to share boxes of fruit snacks with everyone for his presentation about himself and what he loved to eat. His backpack was so heavy from the snacks that when he ran down the sloped path, the weight of his bag caused him to fall. He scraped up the whole right side of his face.

The sad part wasn’t the injury. It was the fact that he didn’t want to stay home from school that day, even though I was allowing it. He insisted on going back to school to share those fruit snacks.

On my way back home with the dog, I thought about my son’s fruit snacks and 100 other things related to those old days long gone. I passed by that park again with those parents and their toddlers, only now I heard crying instead of laughing. Must’ve been nap time.

As I was walking up my driveway, I thought about how I’d look back at these days with my son as nostalgia. Or maybe I’d reminisce instead.

When I got inside the house, my son was finishing up a school project he’d taken home.

“You wanna go to the park and shoot some hoops?” I asked.

“I was just gonna ask to go to park,” he said. “But I was gonna shoot hoops with my friends.”

This story originally appeared in The Acorn Newspapers of Los Angeles and Ventura counties, CA, this week. You can find other stories like it from Michael Picarella at MichaelPicarellaColumn.com.

One thought on “Turkey walks down Memory Lane”