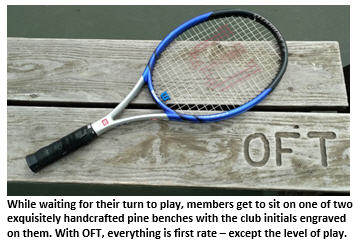 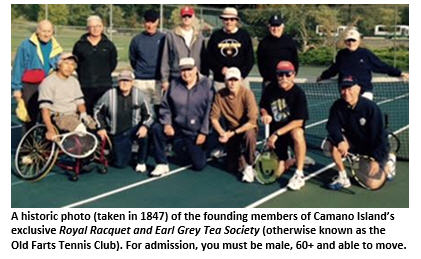 Recently I joined an extremely exclusive club here on Camano Island – the swank Royal Racquet and Earl Grey Tea Society. They play on the only public tennis courts on the island. In order to be considered for membership you must live on the island, be male (sorry ladies, get your own club), be at least 60 years old (at 61, I barely made the cut) and be able to ambulate without any help from your grandchildren.

I was inducted into this fashionable club in a formal private ceremony which involved my walking onto the courts and asking, “Hey, mind if I join you guys for some tennis?” Apparently that was the correct secret phrase because somehow they let me in on my very first try, without any background check or body cavity search.

The posh Royal Racquet and Earl Grey Tea Society, more commonly known by its members as the Old Farts Tennis Club (OFT for short) is 25 members strong plus 11 more who are admittedly weak.

The rules of play for the Old Farts Tennis Club are rigorous:

The OFT also adheres to strict rules of “Net-iquette” to keep the game dignified and encourage gentlemanly conduct at all times (other than when an attractive 45-year-old woman enters the court, that is): 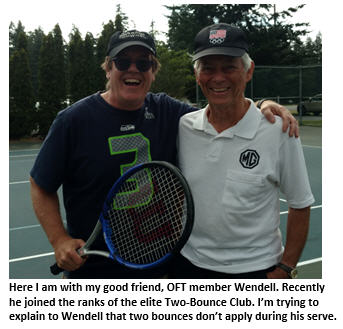 The Two Bounce Club: The OFT has a tradition dating back several years – I want to say to 1735, but I could be off by a few years – in which members who have reached 80 years of age are allowed two bounces to reach the ball. When a member turns 80, the club conducts a special ceremony involving stale gluten-free cookies Barry’s wife made last week, heartwarming comments from younger OFT members about how the newest Two-Bounce Club honoree probably won’t make it to their 81st birthday, and instructions on how to do the secret handshake that is revealed only to new Two-Bounce Club initiates – which they all forget by the next morning, so nobody actually knows what the secret handshake is anymore.

When members turn 90, they get three bounces. And in the unlikely event they make it to 100, they get a free ride in an ambulance the first time they collapse on the court. Legend has it that when OFT founding member Cliff Bledsoe turned 100, he paraded all over the island in the ambulance blasting the siren and shouting over the loudspeaker from the passenger seat to cute women he passed by, asking if they’d like to give him mouth-to-mouth resuscitation.

For information about membership to the OFT, just send me an email. I appointed myself Treasurer. A Lifetime membership costs only $500 – payable to me, in cash, in the parking lot. For $100 more, I’ll make sure your application doesn’t get lost. It often takes months before those lucky few that gain admittance into this prestigious private club ever actually set foot onto the club’s luxurious concrete courts. That’s because at the age most members are when they’ve finally been accepted, they have difficulty remembering where they left their car keys.