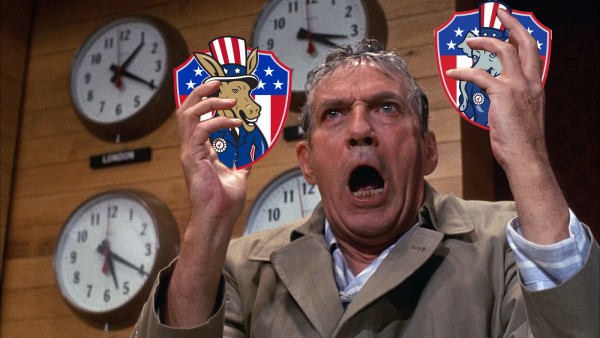 Never in all my days have I seen such low brow, common denominator entertainment in my life. This makes wrestling look legitimate and we all know its staged. Every day now there is some nominee in the illustrious two party system that swamps all news outlets with some temper tantrum bitch fit turned victimization that solidifies that America is not only out of touch with reality but it’s collective citizens definitely has its head up its ass with 1st world problems.

So here the American people are, watching a live action network soap opera with no end in sight.

On one hand, I’m glad that All My Children is back on the air. Granted, I’d prefer Susan Lucci over Carly Fiorina playing Erica Kane any day, but you take what you can get on ABC. This week’s episode was just a rehash of the last couple of months in Pine Valley. The Republicans are in the middle of a party ideology crux. Specifically, maintaining racist, chauvinistic 1950s value systems while lightheartedly embracing tokenism. The lineup is more reminiscent to “A Priest and a Rabbi” or “A Black Man, White Man, Mexican Man” jokes told by June Cleaver.

Now while I’m not a big One Life To Live fan, Hilary Clinton really makes that show worthwhile. The Clintons are an added competitive family in Llanview. Sex, drugs, murder, blackmail and still the apple of everyone’s eye. This week’s episode just let us all know what we’ve always known – the Democratic party is just plain suspect. They don’t let people jump in the pool unless they can get the ocean in it, so the selection is pretty slim. Their three-man lineup is more like the blind leading the blind into a bind and the followers don’t mind.

Now few people catch up with General Hospital anymore. All the independent candidates stay on there. Strong premise without any fillers of scandal. That tends to bore the average viewer. No one knows who those candidates are, and if the last election was any indication, it’s not going to matter if you want to anyway. All third party votes are automatically counted for the democrat or republican in the lead; Ron Paul was very adamant about spilling that tea to those ready to drink it. So no biggie if you’re not caught up on a new episode.

As a viewer, I’m tired of recycled storylines:

-Candidates not talking about the issues, like massive unemployment and the collapsed economy.

-Candidates crying about getting booted from staged debates.

-Candidates with shoddy track records that contributed to the collapsed economy.

-Candidates bought and paid for by corporate interests, my bad, lobbyists.

-Candidates promising free everything to get the poor and illegals to jump on their bandwagon.

-Candidates promising other countries will pay for their clusterfuck ideas.

As a person following politics appropriately, I’m tired of scandals:

-If you are erasing sensitive emails to cover your ass for some backhanded shit you had no business doing and you’re the Secretary of Defense, get ready for the silver bracelet fitting in the morning.

-If you’re slandering Planned Parenthood without researching the facts for yourself and you’ve already ruined a fortune 500 computer company as CEO sit your ass down and listen to learn.

-If you’ve lied about separating conjoined twins at birth when you just watched the procedure because you’re black and that sounds good for Black History Month shamefully disappear.

-If your fat ass destroys a state with taxes and all you can rebut in a debate is that you were there for 9/11 like you saved the day shut the fuck up.

-If you were born in Canada why are you even still allowed to do anything in regards to the presidency? You’re a waste of fucking presidential space.

-If you have only gotten political jobs because your brother and father were two of the most selfish warmongering presidents ever to walk the 20th Century, get into a new line of work.

-If you were a radical in the 1960s with communist leanings chances are you still are there and America can’t afford to gamble with that right now. Especially with you almost being 80.

A Chicken in Every Pot….

It didn’t work for Herbert Hoover and the Hooverville era, and it isn’t working now; but when a political party’s campaign dinner is a thousand dollars a plate or more while people are starving in the streets, you just have to tell these assholes to go choke themselves.

The 1976 movie Network was more prophetic than people give it credit for.

4 thoughts on “What is really going on in the American political spectrum?”