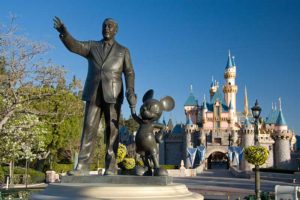 We said we’d wait at least another decade before going back to Disneyland after the last exhausting visit, but there we were, only two years later, going back.

Such a reversal in not without precedent. How many women, after giving birth, say they’re never going to have another child, and then they go ahead do it again anyway? Disneyland, like reproduction, is something that just has to be done. And it has to be done the right way.

My wife is a trooper, and she’ll go along with nearly anything to please her family. However, she wasn’t buying into my Disneyland/childbirth comparison as sound reason for going again when we promised we wouldn’t. She reminded me that after saying she’d never go through childbirth again following the arrival of our son, she made good on that promise.

“Not by choice,” I helpfully reminded her. “Remember, we had intentions of doing it again and we just ran into complications. There aren’t any complications with going to Disneyland.”

Of course, she could change that.

But we asked our son what he wanted to do for his 14th birthday this year, and he suggested the Happiest Place on Earth. With our decision to go came the rules.

“Why does there have to be homework for going to Disneyland?” my wife asked. “Why can’t we just enjoy the day?”

It’s true I have what I call “start work” before going to Disneyland. I also have start work for vacations, holidays and my traditional Italian Sunday dinners. It makes these things more enjoyable.

For example, Halloween starts in August with monster movies, Halloween decorations and lots of planning for the big night. Shark Week, as you know, is happening this week on the Discovery Channel. I’ve been observing the week all month with research and shark talk 24/7.

I’ve taken trips to places we still haven’t been. Those visits to New Orleans and the Grand Canyon became too expensive to actually go on thanks to all the research I did during my preparation, but I’d begun those vacations weeks in advance through articles, books, movies, food and appropriately themed music.

A trip to Disneyland is no different.

“Rule No. 1,” I said to my wife and child. “The house must be decorated with Disneyland souvenirs of the past and Disney books on display in every room for easy access and to keep us constantly in the mood. Rule No. 2: Disneyland ride tunes shall be played whenever possible, at home and in the car.”

That’s when my wife complicated matters by inviting one of our son’s friends to go with us.

Little did my wife know: Our son’s friend knew the rules! His family had been frequenting the fun park for years and was equally as “organized.”

“Trust me,” I assured my wife. “The overall experience will be better this way. Just think: If there was no start work before our trip to New York, we never would’ve known about that steakhouse where that gangland shooting took place, and we never would’ve dined there.”

“Remind me why I wanted to dine there,” she said.

We followed the rules leading up to Disneyland anyway. It was difficult because I was prepping for Disneyland and Shark Week simultaneously. Luckily, a movie like “Finding Nemo” checked both boxes. Not only does it feature Bruce the shark, a perfect mood-setter for Shark Week, but also the film’s undersea characters star in the “Nemo”-themed submarine ride at Disneyland.

As for our son’s friend, he fit right in. At the sleepover the night before, he proved worthy—he knew about going on Splash Mountain first before it got hot and lines got too long. He knew about Dole Whips and non-alcoholic mint juleps.

At the park, our planning paid off. We were getting on lots of rides and having fun. Around noon, our feet finally died. There was little we could do but keep on going because the rule is: You keep riding rides until at least the end of the fireworks, taking advantage of all those people lined up on Main Street to see the show in the sky, resulting in smaller wait times for rides you still have to hit.

Toward the end of the night, we did a little free-styling in the park to please my wife.

“Isn’t this so much better?” she asked. “Who says you need all those rules?”

I had to agree. Sometimes you just can’t debate theology with nonbelievers.

This story appeared in The Acorn Newspapers of Los Angeles and Ventura counties, CA, in July of 2017. You can find other stories like it from Michael Picarella in his book, “Everything Ever After (Confessions of a Family Man),” and at MichaelPicarellaColumn.com.