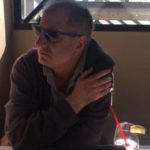 This summer we are highlighting our writers and authors as much as possible. This week, we focus our attention on HO writer Paul Lander. Paul is a twitter phenom with his Ripped from the Headlines tweets which help us laugh so we can endure the chaos surround us.  It’s time to meet this funny man who is so generous in his support of  so many writers and Humoroutcasts.com . Follow him on twitter and Facebook and read his work on Humoroutcasts as well!

Tell us about Paul Lander – state in which you live, profession, family, education, etc.

Let’s see. I’m a Los Angeles based writer, married way out of my league and the proud parent of a pair of two adorable, amazing cats. Plus, I’ve won a few awards to give my mom stuff to talk about with family.

I recently won my second National Society of Newspaper Columnists Award for my humor column, “Ripping the Headlines,” an International London’s Blogger Bash Award and a University of Dayton’s Erma Bombeck Humor ‘Writer of the Month’ Award.

How did you get into comedy writing?

As a kid, I was really shy. I like to say I was voted “Most likely to maybe speak.” In a few classes, I sat next to the funniest kid in class and would write funny lines on a piece of paper or whisper a smart ass remark to him. So, I really started out writing for the funniest kid in class. I’ve kinda been doing that, in one way or another, for most of my writing career.

What kind of comedy writing do you do?

What attracts you to writing comedy from the headlines?

“Ripping the Headlines,” where I take an actual headline and comment on it, was born out of the idea of heckling the news. In the beginning, I found myself quite frustrated with or humored by certain news stories; and I really wanted to make smart-aleck remarks about these headlines, like I was heckling a stand-up. So, I began heckling the news and it’s blend of politics, world affairs and pop culture. Lately, though, I do feel like the headlines are, more often than not, heckling me.

What are your goals for your writing?

I still have a few mortgage payments left; so there’s that. And, I have a couple of books in mind, a TV pilot, and maybe a few screenplays. But, mostly, to just keep writing.

How has social media played a part in your work and your comedy?

The amount of people I’ve gotten to meet ‘virtually’ blows my mind. I even found out an AP English Class actually taught my column in their curriculum … both humbling and horrifying at the same time. And, I’m here talking with you, aren’t I?