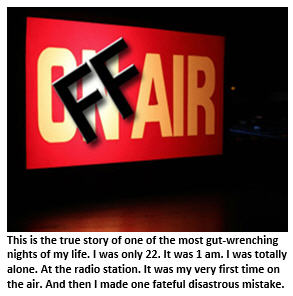 [The following is a true story.]

The year was 1977. I was 22, just out of college, and working minimum wage for a top-forty radio station in Charlottesville, Virginia – WCHV.

I completed a grueling course to earn my Third Class Radio Operator’s license, qualifying me to be on the airwaves – and make photocopies for the other disc jockeys. Perhaps because I broke the copy machine and spilled coffee on the radio control panel, the station manager wouldn’t let me near the microphone – except to read the T & T (time and temperature) on Christmas day when everyone else was at home for the holiday.

My big break came the following Spring. It was 11:30 on a Tuesday night. I was in bed, unable to sleep because I lay there hacking and sniffling. I was sicker than a dog. Then the phone rang. It was the station manager: “Tim, Chris Furlong is under the weather and can’t do his midnight shift. I’ve called literally everybody, and nobody is available. So, what do you say? Want to be on the air?”

“Tonight?” I wheezed. However sick Chris Furlong might have been, I was feeling ten times worse. So naturally I answered: “Abso [cough] lutely, boss! [cough]. THANK [cough] YOU!”

“Sure you’re feeling all right, buddy?”, he asked? “Never felt – ahhhhh-choooo – better. I’ll be right over,” I sneezed.

I arrived at the station at 11:50 for the 12:00 to 6 am shift. At the stroke of midnight, the previous shift’s jock raced out of the studio, like Cinderella fleeing from the Ball. At that moment, it suddenly dawned on me: I was totally alone in the building. The fate of WCHV was upon my shoulders ALONE.

Nevertheless, it was an incredible thrill to be in the chair with the ON AIR sign lit up, as I spoke into the microphone for the very first time. “Good evening. This is Tim Jones – “… I quickly pounced on the mute button as I fell victim to an uncontrollable ten-second coughing fit. “I’ll be spinning the records till sunrise. So, if you have no life, please join me for the next six hours.” I thought I was being witty and cool. I thought a lot of things about myself that were dead wrong when I was 22. 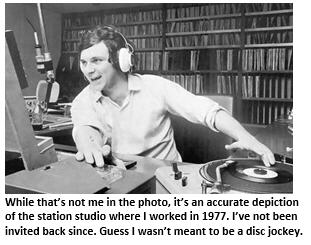 I cranked out one song after another: The BeeGees’ Staying Alive, Crystal Gayle’s Don’t It Make My Brown Eyes Blue, followed by Debbie Boone’s You Light Up My Life. I never said 1977 was the golden age of pop music.

There I was, dishing up the vinyls and even handling the switchboard – all by myself. The latter was surprisingly easy because absolutely NOBODY called the station over the entire six hours I was on the air.

As the national news played at the top of each hour, I was required to take a meter reading, to make sure the station stayed within the proper frequency or wattage or amperage or barometric pressure. I had no clue what the reading was for. All I knew was that there were buttons marked 1 through 10, and I had to press three of them in a specific sequence, then write down the number that appeared on the readout. A trained chimpanzee could do it. But. I was no trained chimpanzee.

At 1 am, I prepared for my first meter reading. Piece of cake. Just press three buttons in order: 4 – 7 – 3. No, wait. Maybe it was it 4 – 3 – 7? Uh oh. Or was it 8 – 2 – 5? My mind was a complete blank. I recalled from the final exam for my Third Class Radio Operator’s License that it was a legal requirement for these readings to be taken at the top of every hour or else we could be fined by the FCC – or was it the FEC? Or the NBA?

I only had a window of three minutes. The clock was ticking. My foggy, congested brain simply could not remember the sequence! My palms got clammy. I sneezed. I felt like the TV bomb squad cop who can’t remember: Is it the green wire or the red wire? Lives were at stake – specifically, MINE! Only 10 seconds left….

The instant I pressed the third button, a thundering sound exploded outside the studio. All power shut down. Every light went out. I had barely made it one hour into my first radio gig, and I succeeded in knocking us off the air. I was a dead man. I had committed THE CARDINAL SIN of commercial radio: DEAD AIR! I would be fired for sure. 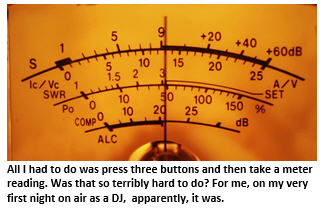 There I was, alone, in complete darkness. I couldn’t see my hand in front of my face. I lost all spatial orientation. I groped along the wall in search of the phone. Amazingly, despite my having taken the entire station down, the phone still worked. I called the production engineer and, of course, woke him up. He arrived twenty minutes later and fired up a backup generator. Thirty minutes after I had killed the station – and my radio career – I was back on the air. I sheepishly apologized to all five remaining listeners for the gap in broadcasting.

The rest of the night passed uneventfully. I even dared to play Paul Anka’s annoyingly drippy song, Having My Baby.

By 6:30 am, I was back home. I had survived. Then the phone rang. It was the station manager. I winced as I prepared to hear him growl, “You’re fired!” But his words took me completely by surprise. “So, Tim, want to try it again tonight? Chris Furlong is still sick.”

“Um, are you serious? Absolutely, boss. But what about my knocking the station off the air?” I inquired meekly.

He laughed. “You thought that was you? Ha! That’s hilarious. No way. Some drunk drove into a power box and took out the power in the whole neighborhood” – at the precise moment that I pressed the third button! What are the odds?

“Got it. Oh, one more thing, boss – what is the correct code sequence?” But once again I found myself talking into dead air – for he’d already hung up on me.

One thought on “NIGHT OF THE DEAD (AIR)”