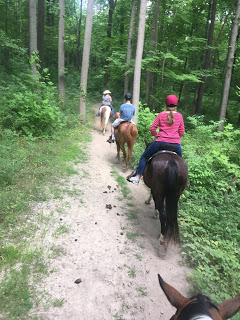 “Would you like to go on a trail ride?” my wife asked in August.

(Yeah, I know. It’s taken me this long to recover from the emotional trauma enough to write about it.)

Do you remember those people on the tourist boat in Hawaii, who got hit by lava when the volcano exploded? It was like that. “Would you like to go on a boat ride? The view is great!” Oh, I’m sure they got an impressive view, indeed, especially during the medivac helicopter ride to the hospital.

My wife, Emily, works at the Pokagon State Park saddle barn which, as you might imagine, is at Pokagon State Park, in northeast Indiana. It’s one of those “they don’t have to pay you as much because you love your job” kind of things, like being a radio DJ, or writing. One of her fringe benefits is that, if the hourly ride isn’t sold out and there’s a horse available, she can bring her husband along on a ride.

At no point while writing that policy did anyone consider whether the husband wanted to go.

I’ve been on about half a dozen trail rides now, so I’m better at it than when I began. The first time, my horse saw some nice grass off in the woods and wandered off, and they found me three days later, still unconscious from the tree limb. Okay, I exaggerate–slightly. The truth is, those horses wouldn’t stray far from their routine trail even if you let them go.

But I hadn’t been on a ride since early last year and … how can I say this and still maintain my self-respect? Okay, there’s no way: I’m out of shape. I haven’t been trail hiking as much as usual due to writing chores, and the muscle stretches the chiropractor gave me to do only work, it turns out, if you actually do them.

But that’s no problem, because all you have to do is ride, right? You horse people, you’re laughing right now. Well, first you have to get on the horse, which involves putting your foot into a stirrup, which is fine except the stirrup is at the level of your chest. I haven’t been able to lift my foot to chest level since I was eighteen. Hah! Kidding–I couldn’t then, either.

Then you have to swing your other foot over the horse which, I think, is when something happened. I didn’t notice it at the time, because I was busy noticing how very high up above the ground I was. The words “head” and “melon” were intertwining in my mind right then.

On the first leg of our 45 minute trip, a coyote casually walked out onto the trail, right in front of us. He looked over our way, and I expected him to say, “Have you seen a road runner go by lately?” But what he actually said was, “If Mark Hunter falls off the horse, can I have him? I spent all my food money on an Acme brand anvil.”

Well, that’s the predator vibe I was getting from him, anyway.

I expected to be sore the next day. But as I climbed down after a scenic and uneventful ride, something felt … off.

I didn’t even know there was a thing. It’s very low on your back, on each side, or maybe very high on your hip, or–let’s face it, it’s a butt muscle. I suspect it happened when I climbed on board, but at the time I was too terrified to notice. Yeah, I’ve done this six times now, but I’ve also seen all those YouTube videos entitled “Riding Gone Wrong”.

Also, I once personally saw someone fall of a horse. They didn’t get up fast.

But there was an upside. I’d been reading the second novel in George R.R. Martin’s Game of Throne series, and those books are thicker than the Federal budget. Once the pain killers kicked in and I was settled on the couch, I got in some great reading time.

Maybe I’ll even ride a horse again. Next year.

3 thoughts on “Pulling The Horse Muscle, or Break In the Saddle Again”