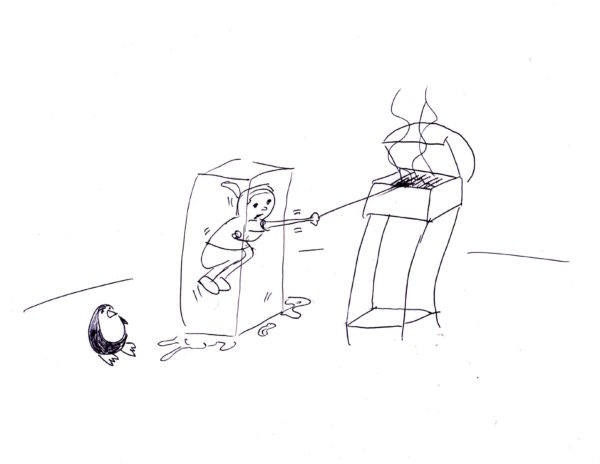 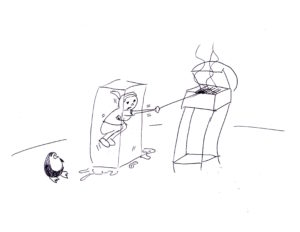 It was January. And what a perfect time to be outside in the sun.

My wife, our 11-year-old boy and I went on a morning hike. In Southern California, you can do that. Still, my wife had our kid bundled up for an Indiana blizzard.

He hated that. Even if his lips were blue and his fingers were icicles, he was “fine.” He insists that he’s “all grown up” and “a man,” though we have to nag him every night to take a shower like he was still 10. What do boys have against showering anyway?

On the way back home from the hike, our son proposed a barbecue for dinner. He knew what was coming, and he was all set to fire back.

“It’s burning,” the kid shot back.

“It’s gonna be cold by dinnertime.”

It was all settled — no barbecue.

Our son promised he’d tell us if he got cold at any time during the meal. He loves eating outdoors.

Others on the block had the same idea — that sweet aroma of smoking briquettes was floating through the neighborhood the same way I wished the smell of our trash wasn’t. Who throws out leftovers the day after trash pickup? (That’s another story.)

“How about a game of bocce ball or some ice cream?” our son suggested to get into the barbecue mood. “Or how about we go swimming?”

“We can’t do any of that right now,” I told him. “Grandpa and I have to barbecue.”

“I’ll be helping, too, Dad,” the kid replied. “All three of us men will be barbecuing.”

We three “men” were living it up, talking about manly things like the oppression of the modern husband, and cooking up all kinds of meat — steak, chicken, hot links (not mild).

“Men don’t ‘cook’,” my son corrected me when I said it. “We work with slabs of meat and fire.”

The steak was taking too long. We should’ve gotten thinner meat. The cold was coming in, and we needed at least another hour for even medium-rare. Winter was definitely amongst us — I had to put on a sweatshirt (Welcome to Southern California!).

In no time, my wife was suggesting we eat inside where we wouldn’t be so cold.

“You’ll be cold out here,” she told him.

I agreed that we’d be fine. My wife bundled up and brought out a few hundred layers of clothing for our kid. When it came time to eat, Grandpa rolled the barbecue close to my wife and his grandson so the flame would keep them warm. Great idea!

Our son thought it was a bad idea. He saw Grandpa and me in the cold and was jealous. He wanted to be cold, too.

“Fine,” my wife and I gave in. “Take off your jacket, freeze to death if you want.”

He took off his jacket and put on a big smile. He wasn’t shivering at all.

I could see what was going on in his mind:

The scene took place in Alaska or the North Pole, and we were all lost in a snowdrift. My wife and I were frozen. Our son gave his only jacket to his mother. “You’re such a man,” she told her strong boy. Then he cut a hole in the ice with his bare hands, dove into the icy-cold lake below and came up with some fish in his teeth for us to eat. He was grinning. He was in deathly-cold water and he was grinning.

And then I could see a bunch of girls in provocative winter wear blowing kisses to our son for his manliness. Wives know what we’re thinking. She kicked me under the table and I lost the telepathic transmission.

We made it through the dinner. Our son did great in the cold. He was still wearing that smile.

After cleaning up, the boy actually volunteered to take a shower. He ran into the bathroom and didn’t even take an hour to undress like usual. And the showering took longer than his normal two minutes.

Three hours later, when he turned off the water, he was completely thawed out.

This story originally appeared in The Acorn Newspapers of Los Angeles and Ventura counties, CA, in January of 2015. You can find other stories like it from Michael Picarella in his book, “Everything Ever After (Confessions of a Family Man),” and at MichaelPicarellaColumn.com.