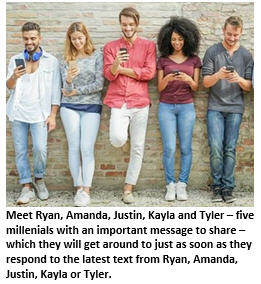 [Note: This week Humor Outcasts turns over the editorial reins – and hope we don’t regret this decision – to five outspoken millennials – Ryan, Amanda, Justin, Kayla and Tyler (at right) – who have demanded the opportunity to share what they believe the rest of us need to accept, based on the collective wisdom of young people. Looks like our future is in good hands.]

Hey, you Gen X’rs and Baby Boomers. You geezers have called the shots 4 way 2 long. It’s time we millennials explain the new rules. This is our BILL OF RIGHTS, or as we prefer to call it, our BLLORTS.  Just so you won’t whine about having no idea how to “translate” our writing, we’ll use complete sentences (what a hassle), with punctuation and vowels – thgh, srsly, who bthrs wth vwls ths dys?

As a Millennial, I proclaim that…

Climate change is real. It’s going to destroy the planet if we don’t do something about it NOW. I plan to get actively involved, of course, but for the moment I’m busy checking out my options on Tinder and Bumble. But right after Monica swipes me back, I’m all over saving the planet. Text me when Florida starts to submerge.

We need to help people in need. There are millions of people all over the world who don’t have nearly enough to get by. It’s time we look out for those unfortunates. Speaking of people in need, I need you to pay for my airfare home for Christmas. I had to buy a new iPhone X, so my Venmo account is low.

Marriage equality rocks. Nobody should be allowed to tell anyone who they can marry – unless it’s to a Trump supporter. Then Hell no! They might breed.

I deserve a fair wage. I graduated from college with almost a 2.0 GPA, with a double major in Early Viking Philosophy and Pilates. So, I think I’ve established my job qualifications. Why should I accept anything less than a livable wage? And by livable wage, I mean $75,000 a year.

My parents need to stop calling me. Dudes, will you just chillax? Do you really need to call me every weekend with an update on your garden’s tomatoes? Stop it! You can make our lives better by not calling me – EVER. If you really need to reach me, just text. What did you think phones were invented for anyway? DUH! If it’s important, I’ll get back to you … eventually… maybe. No promises. Sorry not sorry. 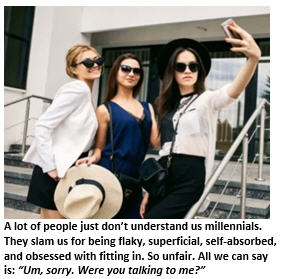 I need a job that makes me feel inspired. Just a job is so, well, BASIC. It’s hard enough that you insist that I put in a full 25-hour work week. If you expect my best, then elevate your game, boss dude. Inspire my best work by providing a ball pit in the employee lounge. While you’re at it, I could go for free daily in-office massages and an arcade center – to get my creative juices flowing. Is that too much to ask?

You need to stop reminding me. You already reminded me five times that I need to get off your car insurance and buy my own. But I can barely make the payments on my 2017 Beamer, so the fact you expect me to pony up for the insurance is totally unfair. And stop reminding me all the time about voting. It’s on my to do list. I’ll get around to it right after the next election.

I am not addicted to my phone. I’m sick of older people saying, “you kids would not last a day without your phones.” As if. I put my phone down all the time, like when I’m in the shower, or sleeping – okay, maybe just when I’m sleeping. But I could do it anytime. Last week, I went without my phone for two hours. Admittedly, I spent those two hours looking for my phone, but my point is, I did it, so back off.

Parents should be banned from Facebook. For the last time, stop posting “adorable photos” of me from when I was five on your Facebook page. And stop trolling me. It’s creepy. On second thought, I haven’t used Facebook since 2014, so I guess I really don’t care. But leave my Instagram and Snapchat alone. Don’t make me ghost you. 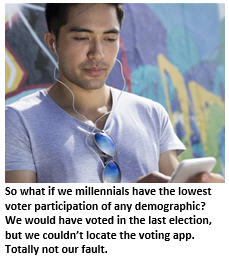 My time is more important than yours. That’s why if you’re going to text me, please do it in less than 50 characters. If you can’t get to the point instantly and if you don’t understand the difference between

I am an adult now. Treat me like one. I’ve graduated from college. I have a real job now, with my own place, my own hammock bed, five roommates, and a monkey. And a year’s supply of avocados. So, it’s time for you to let go and let me live my own life. I’ll be fine without you telling me what to do.

Of course, if my job as a Pilates instructor doesn’t pan out, don’t worry. I have a backup plan. I’ll just move back home for a couple years to save some money. But when I do, don’t expect me to pay rent or help out with the groceries or make meals or do my own laundry. After all, I’m still just a kid.

4 thoughts on “A Millennial’s Bill of Rights”