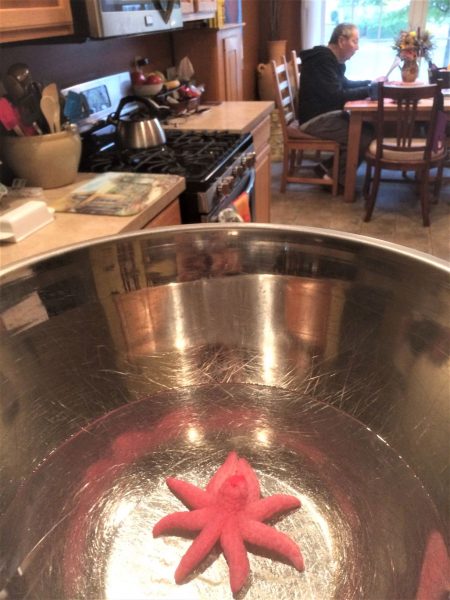 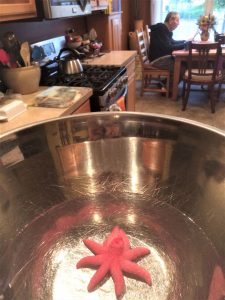 Today I am grateful for Crazytown.  And I live there.  I swear it is never a dull moment in the lives of Himself and me.

I made the mistake of taking him to the Dollar Store because I wanted to get some decorations for our granddaughter.  He complains a little, then marches off to the toy section and finds more useless junk than God makes.  Except someone makes it.  Schlock sells.  To him.

I’ve got my cart full of necessary collectibles like window color-forms, spooky napkins, spider rings with sparkly “gems” as their bodies, a hanging witch with moveable arms and legs and black cat in a witche’s hat.  Necessary stuff!  I go to find him, in the toy aisle.

“We have to get these,” he says, holding up a package with two flat, rubberish creatures, one an octopus, the other a fish.  “Alina will love them.”

“Unauthorized purchase,” I say, knowing how much he loves that when I have a cart full of stuff that also qualifies.  “They’re boring.” I try to get him to put them back.  “They aren’t even pretty and don’t do anything.”

“Oh, but that’s where you’re wrong!”  Now he’s getting animated and Dollar Store people are looking at us like we might go whacko.

“You put them in water and they grow to 600 times their size!”  He’s way more excited than appropriate, but those stupid things land in my cart.  Some battles are just not worth going to the mat for, especially ones that cost a buck.

It’s probably five minutes after we get home, following an afternoon of other errands, when he says, “I want to open these,” holding the package of blow up thingies.  Has he been ruminating over these stupid things all afternoon?  Every time I speak is he wishing I would shut up so he could dream of his creatures?  Probably.

“I thought they were for Alina,” I say, not letting on that this was not my first rodeo and I was on to him.

“Well they were. . .but don’t you think we should see how awesome they are before we give them to her?”  He’s already ripping into the package.  “The directions say to put it in a bowl of water big enough so it can grow 600 times it’s size!!”  His excitement is a little scary.  “What bowl should I use?”

“I guess the really big one,” I say.  “How long will it take for this monstrosity to start taking over the house?”

“It says a few days!”  Oh goodie.  I’m picturing the thing expanding like my hips, soaking up all of the water in the huge bowl and popping over the top like rising bread dough.  There’s a horror story in here somewhere.

No worries there.  It has barely changed in five days.  That’s five days where the huge bowl of water with a pink octopus has been sitting on our pass through.  Five days with each of us checking the bowl several times a day, like parents of an overfed goldfish.  Five days of us analyzing how much it’s grown, wondering if we should add more water and questioning the package advertising of a 600 times growth.

“I think they saw me coming,” Himself says.

“You think?”  Ever the supportive wife.

“You know I measured it today.”  I look at him in that perfect “wife” way that husbands everywhere are familiar with.  “It’s grown maybe 150 times it’s size, but nowhere near the 600 advertised. Maybe we should just dump out the water and forget about it.” He looks way more disappointed than he should.  Sad, but in a sort of resigned, hopeful way.

“We’ve gone this far,” I can see him perking up, “Let’s let it soak for a few more days and see what happens.”  So we are.  If you don’t hear from me in a few days, look for me under a gigantic pink octopus.  I hold full rights for the film.  Never a dull moment here in Crazytown!