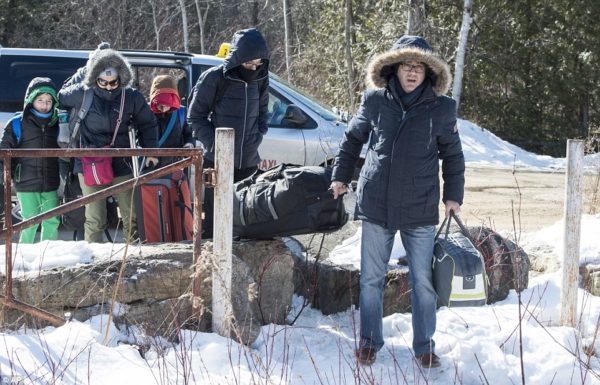 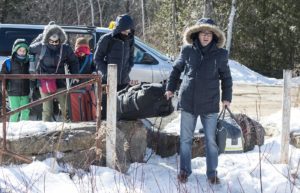 In response to overwhelming job stress, social oppression and poor working conditions, hundreds of ICE (U.S. Immigration and Customs Enforcement) officials and workers have streamed in hastily put together caravans to the Canadian border seeking asylum. The bedraggled lot, tired and hungry after their flight and worn down physically from the extremes of the workload that had been thrust upon them, waited patiently at the various borders with our northern neighbor to be let in.

“We know how this game works.” stated Collin Roberts, a Customs Inspection official from El Paso, Texas. “We all just have to be patient and that the Canadians will process us as soon as they are able. I don’t think there is a person in our group who doesn’t understand that it is not an easy task on their part.”

Roberts should know. He had just escaped a grueling 60 hour work week trying to process the hundreds of illegal immigrants trying to get a toe over the border at his El Paso station so that they could claim the asylum they insist was their right. The work load, the language problems, the deteriorating conditions at the station due to the volume of refugees and the constant criticism from the press all worked together to bring a near-nervous breakdown to Roberts and his co-workers.

“It was just too much! Just the communications alone was horrendous. As border agents we are taught some Spanish, but then we started to get these unrecognizable local dialects and accents from Honduras, Guatemala and God knows where, then added to that came people with the local indigenous languages who did not even know Spanish themselves. It was like the Tower of Babel all over again!”

“And when it comes to controlling the crowds, we don’t need a wall, we need a separate planet!”

“The Canadians are one of the forerunners for letting in everybody in the world into their country, but even they would put a quick, sensible stop to the hordes that we are getting.!” stated Marlene Donahue, ICE lice inspector at the Brownsville crossover in Texas. “Only we and Angela Merkel are dumb-assed enough to let everyone and his brother and his cousins in without hesitation.”

While the Canadians were dealing with their relatively minor invasion to the north, all hell was breaking loose at the U.S.’s southern border. With not enough manpower to halt or to process the illegals coming in they began to flood across as soon as they realized the weakness caused by the agents deserting. Mass groups would run across the border, stake out an empty piece of land and claim it as belonging to their native land, then go about setting up a ‘favela’, a Brazilian name for a squatters settlement. This would attract more and pretty soon there would be overcrowded and some would leave to grab another piece of land.

In the cities where they were already being processed once they realized that their ICE guardians had fled the newcomers would take over the facilities and barricade themselves in against police interference. Here they set up “Little El Salvador’s” and Little Venezuela’s and probably even Little Falkland Islands where Spanish was the only language and Yanquis were not allowed.

In more rural areas the immigrants left their enclosures to raid the fields and gorge themselves on their bounty. They set up camps and, again, claimed them as their sovereignty.

Upon learning of the disorder at the border, the ICE agents still waiting patiently at the border could only say, “Thank God I don’t have to deal with it anymore.”

Meanwhile, Canadians are secretly considering building their own wall.