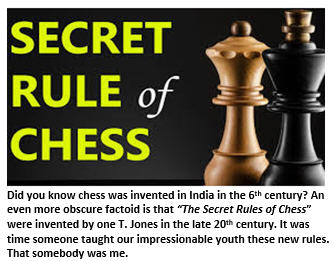 [The following is a partially true story.]

As a parent, I have long tried to be a role model for my children. I have always striven to teach my daughters fundamental values like integrity, honesty and good sportsmanship – except when it came to chess. Then all bets were off.

When my girls were seven and eight years old, respectively, I taught them the ancient game of chess (something for which they have never forgiven me). Initially, their skills were rudimentary at best. But after a couple years of patient mentoring, they were able to name most of the pieces on a multiple choice quiz.

Eventually, their games improved to the point that, over their vehement protests, I enrolled them in a chess tournament at a local elementary school. Upon arrival, I noticed that most of the kids and their parents had something in common: almost none of them looked like me. That’s because, of the 300 kids in this competition, 95% of them were either Chinese, Korean, Indian, Pakistani, or some other Asian demographic. I’d heard about Tiger Moms, but never have I seen so many in one room – the intensity in their eyes was daunting. As for the remaining 5% of kids, they didn’t stand a chance.

My girls were born in China, so on paper at least, they fit the demographics. But that’s as far as the similarity went.  Factor in that I was their teacher and they had about as much chance of winning this competition as I had of becoming the next Pope.

The event went on forever, beginning at 8am on a Saturday and ending sometime after I lost consciousness from ennui. Every child played five rounds that day. After one match was over – which in my kids’ cases was usually about nine minutes – contestants were sent back to the cafeteria.

In these long breaks, parents ensured their prodigies devoted every minute to sharpening their skills, practicing feverishly until the next round arrived. I was so bored that after a couple hours, I broke down and challenged some of these youngsters to a game. I don’t want to brag, but there was this one third grader, Jason Kim, who needed 21 moves before he checkmated me. That was my best performance. Most games were over shortly after I located my horse. 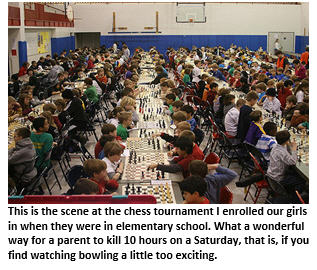 No doubt about it, these prepubescent grandmasters were extremely sharp. After a string of five embarrassingly quick defeats, I knew it was time to shake things up a bit. I decided to give these miniature Bobby Fischers a lesson by employing my own Secret Rules of Chess. My next opponent was a nine-year-old named Raza. After a conservative opening, Raza, boldly advanced his bishop into an attack position against my exposed queen.

I contemplated my options, and then, in a maneuver I’m fairly certain Raza did not see coming, I nudged my queen backwards off the board and brought her back onto Raza’s end of the board, putting his king in check. Raza jumped up and exclaimed, “You can’t do that!”, to which I calmly replied, “Apparently you’re not familiar with the Queen’s Revolt.”

He was, of course, more than a little confused, in part because the Queen’s Revolt doesn’t exist (in chess, that is). That’s when I began to weave a tale of how this tactic was first used by the Duke of Hapsburg against the Viscount of Mordovia in 1542.

In game after game, I continued to keep my young foes completely off balance with one surprising technique after another:

The Bad Bishop’s Deceit: My bishop gets to progress diagonally in two directions on the same turn – and can leap over pawns.

The Peasant’s Uprising: This can only be done one time per game – and only by the black chess pieces (because I was playing black). I can select one pawn to become a queen for four consecutive moves.

The Knight’s Alphabet: Here, my knight can do the usual L-shaped trot, followed by a W-shape, and even a Z.

Storming the Castle: One of my favorites. I jettison both of my rooks in unison the length of the board thereby taking out both of my adversary’s rooks and any other playing piece in their path. This is a particularly powerful stratagem but one which should only be attempted if your opponent is very young and incredibly gullible.

Of course, with each “secret rule of chess” I made up, I explained in great detail its fake historical origins, dropping the names of plausible sounding kings, earls and baroness, and how, while not recognized in the United States (or China or Pakistan or India or any country where any of these kids’ families were from) they were widely accepted in places like Lichtenstein, Moldova or any obscure European country I was confident they’d never heard of. 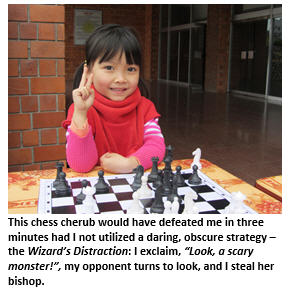 I quickly garnered a string of five straight victories. My opponents had no clue how to defeat me. I even trounced the enormously talented seven-year-old Kevin Wong. I must admit, he would have beaten me in seven moves, had I not cleverly resorted to the masterful King Arthur’s Evasion: when he had me in check, I simply advanced my king the entire length of the board, jumping over several of Kevin’s pieces, and took out his rook.

Kevin protested until I patiently explained that this stratagem was first used by King Henry VIII to defeat Napoleon when they met for the World Chess championship in Reykjavik, at the height of the Spanish-American War.

Everything was going along swimmingly, until in the championship round, ten-year-old Raghav Patel employed a daring gambit he had learned from me – the ingenious Sultan’s Escape. He boldly took his king off the board for one turn to avoid being checkmated and then returned it safely to a different part of the board. Raghav was immediately required to forfeit the championship match to his rival, Fatima Shambhani. Apparently, tournament officials weren’t familiar with this move which, as I told Raghav, was first done by a Moghul sheik in the 15th century, during the Irish Potato Famine.

Several parents, who if you ask me, were wired way too tightly, filed a petition to have me permanently banned from any future chess tournaments. I guess some people just have no appreciation for the finer nuances of this ancient game.

2 thoughts on “The Secret Rules of Chess”