“I seriously don’t know what it is with these human ‘leaders’ who think they run the world,” Rocco said as we stepped onto the stage at the G-20 Summit.

“They’re delusional,” I said as I checked the placement of the microphones and the podium.  “They believe they’re in charge, like some crazy guy who thinks he’s Napoleon.”

We were joined by Chester, an orange tabby who went walkabout years ago while just a kitten.  He’d been on the run, or “feral” in human-speak, ever since, returning to our home on infrequent occasions to berate us for being domesticated house-cats, while he has fomented revolution where’er he went. 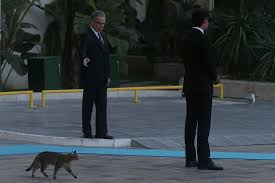 “If you would come out of the woods every now and then, you might know,” Rocco said.

“I’ll take that to mean you don’t know,” Chester said.

“Oak?” Chester said to me with a quizzical tone–or was it merely skeptical?

“It was expansion, like the Memphis Grizzlies, or the Florida Marlins,” I said.  “Broadening the base gets more fans interested in the machinations of the lever-pullers who control the world’s economies.”

Billy Marlin:  “Why am I wearing my pajamas at the ballpark?  Why not?”

“Have they added a wild-card format since I went off the grid?” Chester asked.

“Good Lord,” Chester groaned.  “I step out of the room for 5 years and all hell breaks loose!”

“Enough with the kvetching,“ Rocco said.  “We’ve got some serious ruling to do.”

“I’m with you,” I said.  “The twenty humans they’ve assembled for this chivaree couldn’t find their asses with both hands.” 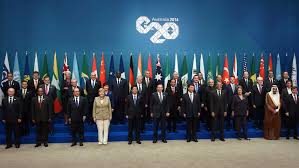 “Why is that I wonder?” Chester said.

“The kind of people who are attracted to world government are precisely the ones who shouldn’t be allowed anywhere near it,” Rocco interjected.

“Because?” Chester asked.  He has been out in the woods a long time.

“Because of their vaunting ambition, and overweening self-regard,” Rocco said.  He’s like that; a slumbering giant in the vocab department, but once he gets going it’s Katy-bar-the-door–whatever that ancient phrase means.

“Still,” I said, “I think there’s one world leader who deserves our support as cats.”

“Which one’s that?” Chester asked.

I could sense an explosion coming on, like Old Faithful or the Mount St. Helens volcano.  It was Rocco, stifling a laugh, which he could restrain no longer, as he erupted like Vesuvius.

“And why on earth should we give a rat’s rear-end about her?” he asked with evident skepticism.