Skip to content
Recent Humor
Last Call for the Merit Badge Failures
No onion, no cry..
Fraud! Moby Dick Was Not a Whale
Cartoon: : Jilly, Jilly, I hope I didn’t give you the Covid
Me and Emily Dickinson in the ’70s

The Manuscript Writing Cafe in Tokyo caters to blocked writers, charging them approximately $2 an hour for a seat, or $4.50 for more desirable spots facing walls.  Patrons are fined if they do not meet their daily word quotas. 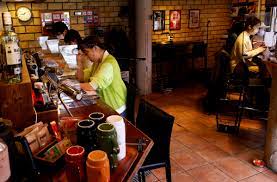 I have come to Manuscript Writing Cafe out of desperation.  Progress on Under the Aspidistras, my coming-of-age roman a clef about a boy and his Komodo dragon, has slowed to a halt.  Unfortunately my muse is a rule-bound schoolmarm who keeps interrupting my creative flow with that-which questions, and objections to prepositions that I end sentences with.  I mean, sentences that I end with prepositions.

See what I mean?  I no sooner start than I’m stopped in my tracks by second-guessing myself.  At the rate I’m going–250 words a day on a rainy day, when I’m not tempted to go outside for a stroll–I will be dead before I’m done. 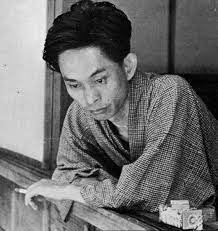 Yasunari Kawabata:  “I shoulda sprung for a view of a wall.”

I’m encouraged by the greats who have resorted to ryokan–roughly translated, a self-imposed writer’s prison–to force themselves to get the kuso [fuck] to work.  Yasunari Kawabata won a Nobel Prize in Literature for his ryokan-assisted works; Yea Taguchi, his female room attendant, “would prepare charcoal for his heater to last through the morning and a thermos of hot water along with a pot filled with tea leaves,” according to The Wall Street Journal, “The Daily Diary of the American Dream.”  It paid off, big time–approximately $1 million in prize money, plus with that Nobel medal hanging around your cool fleece pullover you have to fight off the literary babes with a bo using state-of-the-art Bojutsu techniques.  I’d like to get me a piece of that action.

Bojutsu:  “Drop the bodice-ripper and nobody gets hurt.”

There are three levels of voluntary imprisonment at Manuscript Writing Cafe; the bargain-rate “Just Leave Me Alone With Coffee/Tea” service, which is nothing more nor less than it sounds like.  One step up is “How’s It Going?” which includes an hourly check-in by one of the owners and a chance to refresh one’s self from a plate of candy, rice crackers and cookies.  The double-stuffed Oreos are to die for, which was unfortunately the cause of novelist Yukio Mishima‘s suicide.  I told him–stick to Fig Newtons or Lorna Doones, something you won’t eat yourself to death with.

Yukio Mishima:  “I could really go for an Oreo right now.”

Kuso–another sentence ended with a preposition!  Thank God I didn’t opt for the “hard level,” under which a monitor stands behind your desk like a proctor at a school entrance exam, ready to pounce on you if you so much as split an infinitive.

Don’t know how I’m going to hit my quota today unless I resort to the oldest trick in the writer’s bag of verbosity–exposition!  “It was a dark and stormy night” has already been used by Edward George Bulwer-Lytton, a guy so word-besotted he crammed four of them into his name, like a squirrel storing acorns in its cheeks for the winter.  “It was a beautiful day . . .”  Scratch that–show don’t tell. 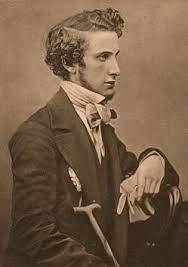 “Takuya looked out the window at the dark and stormy night.”  Much better.

Eleven words down, 239 to go.  If I don’t hit my goal, I have to pay a fine of $22 a day, which means I’ll have that much less money tomorrow and won’t be able to afford a prime place in front of the wall.  God how I’ve come to love the one with the water stains from the leaky roof; it reminds me of a peninsula or an isthmus or an archipelago in the South Pacific, where nubile maidens sway gently from side to side while they feed you fish and poi, just like in the song I Want to Go Back to My Little Grass Shack in Kealakekua, Hawaii.  I think Arthur Godfrey used to sing that on his . . .

Dammit–there I go again, woolgathering when I ought to be writing.   Just got to buckle down.  Maybe I just don’t have the sitzfleisch you . . . I mean one needs to be a great writer.  Translated literally, the German word means “sitting meat”–or as Oliver Stone put it: ass + seat = writing.

Maybe that’s the problem.  My butt just isn’t big enough for me to keep my derriere-in-my-chair-i-ere.

Cartoon: : Jilly, Jilly, I hope I didn’t give you the Covid